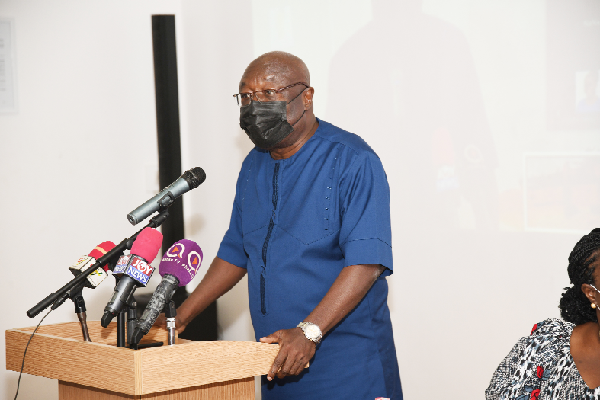 Dr Kwaku Afriyie, the Minister of Environment, Science, Technology and Innovation, delivering the keynote address at the launch of the National Steering Committee of the Africa Environmental Health and Pollution Management Project.
30.5k Shares

The Ministry of Environment, Science, Technology and Innovation (MESTI) has launched a programme to reduce exposure to mercury and regulate mercury use in artisanal small-scale gold mining.

The programme is known as the Africa Environmental Health and Pollution Management Programme and is funded by the World Bank at a cost of $8.7 million locally.

Ghana is one of the five African countries selected to implement it, with the other implementing countries being Kenya, Zambia, Tanzania and Senegal.

The programme is aimed at reducing exposure to mercury and unintentional persistent organic pollutants (POPs) through mining for better environmental, human and animal health outcomes.


Launching the five-year programme in Accra yesterday, the sector Minister, Dr Kwaku Afriyie, said although the use of mercury in artisanal small-scale mining was legal in the country, the improper handling and disposal of the chemical had resulted in some cases of mercury intoxication among miners and people living in mining communities.

He said that situation, if not checked, would lead to high mercury-related health problems in those communities.

“The inhalation of mercury vapour can produce harmful effects on the lungs and kidneys, as well as the nervous, digestive and immune systems,” he said.

Dr Afriyie said consequently, the country had instituted a number of interventions, which included the ratification of international conventions and management laws to deal with e-waste and the chemical pollution menace.

However, he said, there were still gaps in expected outcomes and efforts to reduce the impact of e-waste and mercury use in artisanal and small-scale mining activities on human health and the environment.

“This current World Bank programme is expected to contribute to improving artisanal practices of small-scale miners and competitiveness through increased adoption of new mining technologies and enhancing land and water management practices, safer and environmentally sound techniques,” he said.

The advantages of the programme included further helping national efforts at solving its e-waste challenges, he added.

A national steering committee for the programme, chaired by Dr Afriyie, was inaugurated to facilitate implementation.

The 16-member committee has representation from MESTI, the Environmental Protection Agency (EPA), the ministries of Local Government, Decentralisation and Rural Development, National Security and Sanitation and Water Resources, the Office of the Attorney-General and Ministry of Justice and the Ministry of Chieftaincy and Religious Affairs.

Other entities represented are the ministries of Defence, Lands and Natural Resources, Health, Finance, Trade and Industry and Food and Agriculture and the National House of Chiefs.

The Country Representative of the World Bank, Mr Pierre Laporte, said the recent Ghana Country Environmental analysis estimated the cost of environmental degradation in the country per year to be $11 billion.

He said the analysis pointed to the conclusion that environmental degradation and unsustainable natural resource use posed a significant risk to future economic growth, as well as a threat to public and ecosystem health.

“Illegal artisanal and small-scale gold mining activities have a heavy footprint, causing deforestation and loss of biodiversity.They also release chemicals and heavy metals that contaminate soil, water and air, with its accompanying health and environmental effects,” he said.

Mr Laporte said in that regard, the World Bank was committed to supporting the government to address those environmental challenges by investing in pro-growth, pro-poor and pro-environment policies and projects.

The Chief Executive Officer of the EPA, Mr Henry Kwabena Kokofu, said apart from the numerous benefits and opportunities in the artisanal small-scale gold mining sector, the illegal and unregulated nature of mercury use had created a legacy of severe adverse and irreversible environmental and health damage.

He said as a result, the agency had been working with players in the artisanal small-scale gold mining sector to ensure that the use of mercury did not adversely affect humans and the environment.