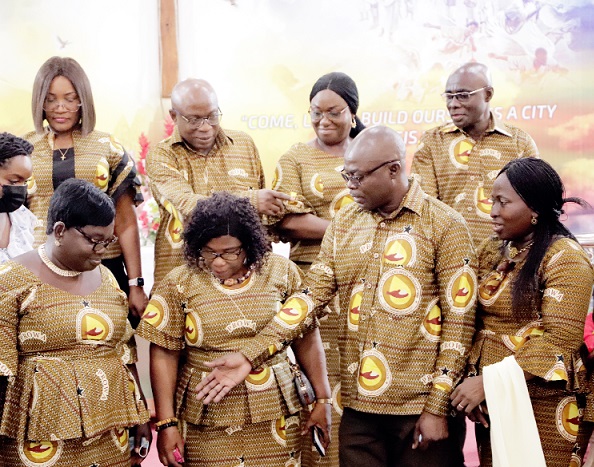 The Prison Officers Wives Association (PROWA) has inaugurated into office eight national council members to steer the affairs of the association.

The executive also has the mandate to make vibrant the association which has been dormant for some time.

The National Council is presided over by Professor Mrs Irene Egyir, with Mrs Patience Omane Addo and Mrs Mabel Adu Awuku serving as the National Vice-President and National Organiser respectively.

The short ceremony held at the headquarters of the Ghana Prisons Service in Accra yesterday was also used to inaugurate a national patron and a non-executive member of the association.

The Chaplain General of the Ghana Prisons Interdenominational Church, Rev. Fr Selwyn S. Adama-Okai, swore the council members into office and charged them to be fair and firm in all their dealings and decisions.

He called on them to live exemplary lives that would bring the peace and grace of God into prisons across the country.

The ceremony attracted some dignitaries in sister security services, including the National President of the Police Wives Association, Mrs Anita Dampare.

The National President of the association, Prof. Mrs Irene Egyir, in her address, stressed the need for the wives of officers across the country to come together and do their best to support their partners in building the country.

Prof. Mrs Egyir, who is the wife of the Director-General of the Ghana Prisons Service, noted that the association would not only support their partners but do their best to solve societal issues.

She disclosed that the association had a three-year plan to help the society by donating to orphanages, visiting the vulnerable and reaching out to those in need.

Speaking on the theme of the ceremony: “Uniting to Achieve the Goal”, the Director-General of the Ghana Prisons Service, Mr Isaac Kofi Egyir, stressed need for the women’s group to come together and work towards the goal of the association, which was to be a source of comfort to their partners and the community they found themselves in.

He said the Prisons Service would continue to support the association and equip it to discharge its objectives efficiently and effectively.