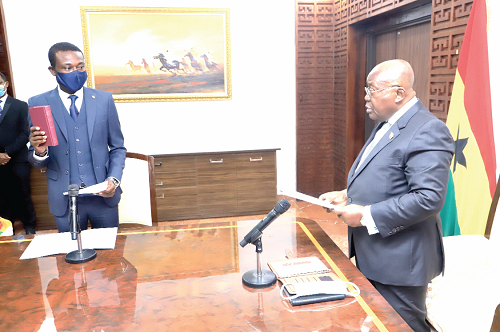 President Nana Addo Dankwa Akufo-Addo has assured the Special Prosecutor (SP), Mr Kissi Agyebeng, that the government will resource the office and provide all the assistance required to enable him to discharge his high duties effectively in the interest of Ghanaians.

He added that all institutions of state would also work and cooperate with him in the same spirit Mr Agyebeng articulated during his approval proceedings in Parliament a fortnight ago.

President Akufo-Addo gave the assurance when he swore in Mr Agyebeng as the SP at the Jubilee House in Accra yesterday.

The President administered the Oath of Office and the Oath of Secrecy to the new SP, after which he presented him with the Instrument of Office covered in the national colours of red, gold and green.

After that, Mr Agyebeng signed the Oaths Book, which was counter-signed by the President.

The Office of Special Prosecutor (OSP) was created in 2018, with Mr Martin Amidu as the first SP.

The preamble of the law establishing the office states that the SP must have “the full authority on the control over the investigation, initiation and conduct of proceedings of alleged or suspected corruption and corruption-related offences involving public officers and publicly exposed persons in the performance of their functions, as well as persons in the private sector involved in the commission or alleged or suspected corruption and corruption-related offences”.

President Akufo-Addo said the remit of the OSP was broad and challenging, adding: “I want to assure Mr Agyebeng, as I did for his predecessor, he will have the support and resources to work.”

President Akufo-Addo described Mr Agyebeng as eminently qualified to occupy the office because he had the capacity, experience, requisite values and intellectual strength to succeed in that vital position.

He urged Mr Agyebeng to bear in mind at all times that the office carried an extraordinary responsibility to fight corruption independently and impartially.

The President emphasised that the wide acceptance of Mr Agyebeng’s nomination by Ghanaians and the nature of his performance during his vetting were indications that the confidence reposed in him to discharge the critical function of state was not misplaced.

He noted that the genuineness of his administration’s commitment to create an independent non-partisan body with the capability to lead the fight and hold public officials accountable for their stewardship of public finances was made manifest in the appointment of a very senior figure from the opposition.

He said in spite of the unfortunate event that led to the departure of the first occupant of the office, “I do not regret making that appointment”.

President Akufo-Addo said he was aware that the activities of the OSP, no matter how vigorous, could not be the panacea to the problem of corruption and called for support and co-operation from other institutions for the office.

He promised to tackle corruption with the same zeal with which President Akufo-Addo’s administration had approached the fight against COVID-19.

The SP said he would be naive to assume that he was coming to stop corruption, noting that as much as possible his office would drive it down and repress it to its barest minimum.

Mr Agyebeng recounted how, when he was nominated, the issues that came up did not centre on his competence but his age and thanked the President for giving the Ghanaian youth the opportunity to serve.