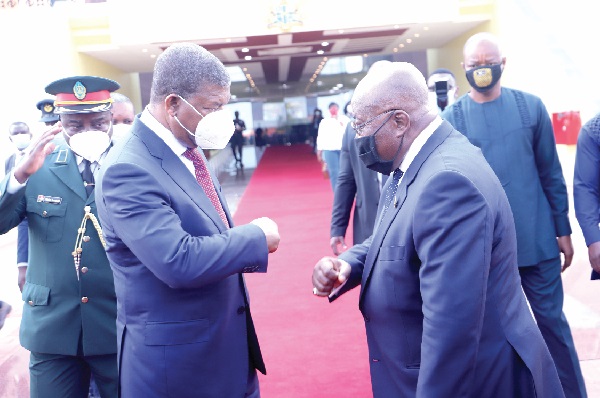 President Nana Addo Dankwa Akufo-Addo has said that the three-day state visit to Ghana by his Angolan counterpart, Mr Joao Manuel Goncalves Lourenco, has provided a higher pedestal for lifting the relationship between the two nations to a greater level.

He said he was “anxious” to see to it that the two countries elevated their economic and political relations for the benefit of their peoples, adding that “the visit has provided a greater platform and I will do everything I can, on my part, to move it forward”.

President Akufo-Addo said this when Mr Lourenco called on him at the Jubilee House to bid him farewell after a three-day state visit to Ghana, at the invitation of his Ghanaian counterpart.

In August 2019, President Lourenco invited President Akufo-Addo for a state visit to Angola, and so the Angolan leader’s visit was a reciprocal one that saw the signing of a memorandum of understanding for improved political and economic cooperation.

President Akufo-Addo noted that Ghanaian officials would work out all the required efforts and details to ensure that the two countries build on the solid foundation that had been laid.

President Lourenco, for his part, expressed his gratitude to President Akufo-Addo and his government, as well as the people of Ghana, for the excellent welcome and remarkable hospitality accorded him and his entourage.

He termed his visit as “very successful and a mission accomplished” and said the two countries now had all the ingredients required to strengthen and deepen their relationship.

Earlier, President Lourenco had addressed Parliament, during which he called for stronger collaboration between Ghana and Angola to promote stronger democracy, inclusive governance and the socio-economic aspirations of the citizens of the two countries.

He said such a partnership would also help the two countries explore the potential of critical sectors of their economies, especially in the areas of oil and gas, tourism and culture, to bolster their economic growth.

“We stand to gain a lot if we can work together to harness the huge potential of these two critical sectors to improve the aspirations of our people,” he said.