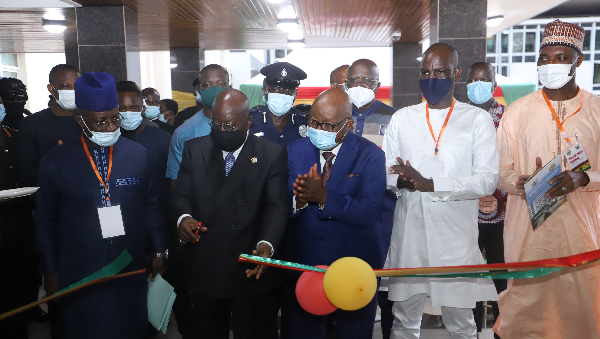 The project, which started in April 2018, is under the Physical Infrastructure Enhancement Projects of Parliament.

President Akufo-Addo said the project formed part of measures to comprehensively address the gaps in infrastructure faced by Parliament over the years.

The new facility provides Members of Parliament (MPs) and staff of the Parliamentary Service with adequate, well-equipped workspaces to perform their functions in a conducive environment.

President Akufo-Addo explained that even after the refurbishment in 2015 of the Statehouse Tower block, popularly referred to as Job 600, not all MPs could be accommodated in the building.

It was to address the situation and also meet other infrastructural needs of the house that the government provided the finances to support Parliament to undertake the project, he added.

President Akufo-Addo noted that a deepened democracy called for true separation of powers among the various arms of governments, and that Parliament must grow to perform its proper role as the organ for oversight and accountability.

To achieve that, President Akufo-Addo said, his administration, since assuming office in January 2017, had increased cumulatively the budget allocation to the House by 56.6 per cent, and had committed itself to supporting the Parliamentary Service Board to initiate and implement various projects necessary for the efficient work of the legislature.

He said lessons from the COVID-19 pandemic re-echoed the need to provide spacious working environments for all key institutions, particularly the legislature, to reduce congestion and curtail the possible spread of communicable and infectious diseases.

The President appealed to the Parliamentary Service Board to put in place the requisite mechanisms, including the necessary facility management arrangements, to ensure the regular maintenance of the newly constructed buildings along with existing offices.

Reacting to a concern raised by the Minority Leader, Mr Haruna Iddrisu, the President assured that the issue of title for some lands around Parliament and the designation of the parliamentary enclave would be settled in the course of time.

To the Majority Leader, Mr Osei Kyei-Mensah-Bonsu, who called for the swearing-in of the next President before parliamentarians in Parliament, the President said the matter would be considered.

The building also has a 150-seater multi-purpose hall with a media room, 11 offices for supporting staff and archives at the basement.

The Chamber Support Services Block is a three-storey building with 26 offices for staff of the Parliamentary Service, with connection into the Chamber Block and the old administration block from all three levels.

The Drivers Waiting Centre has one office, a reception area, 60 to 100-seater area for drivers, an eating area, a snack bar and washrooms.