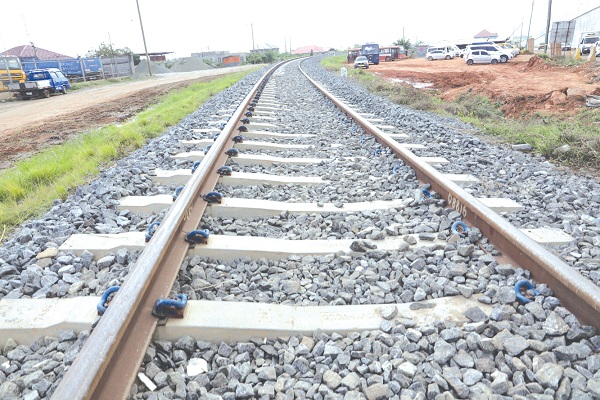 The project, which spans the bridge on the Tema-Mpakadan railway line at Afienya, was constructed by AFCONS Infrastructure Limited.

The President also inspected ongoing construction works at the New Afienya Railway Station and the 300-metre railway bridge over the Volta River Lake near Senchi in the Eastern Region which are almost completed.

The 97-kilometre Tema-Mpakadan railway line is about 99.6 per cent complete and expected to be handed over for use by March 2023.

Work on the $447-million project commenced in 2018, after a contract had been signed with AFCONS Infrastructure Limited, with funding from the EXIM Bank of India.

The scope and design was amended to approximately 97 kilometres single standard gauge line.

Other details of the project are formations, embankments, 137 culverts, 35 bridges, roads over bridges and other ancillary facilities.

There are eight passenger stations, as well as two rail heads, in Tema and Mpakadan.

Inaugurating the project, President Akufo-Addo noted that the rail line had become necessary due to the over-reliance on the road network, resulting in congestion, rapid deterioration of roads and increased accidents.

He noted that it was to address some of those challenges that, in June 2007, the then Ministry of Ports, Harbours and Railways commissioned a feasibility study for multi-modal transport links between Tema and Buipe through the Volta Lake.

He said the study was successfully completed in 2009, and in October 2016, Parliament approved a credit facility and commercial agreement between the Ministry of Finance and the EXIM Bank of India, with AFCONS infrastructure Limited of India as the contractor on the project.

The President explained that the project would address the imbalance between transport used for long-distance transit and domestic freight movements, using the lake transport system.

He added that existing port operations in Tema would be improved, resulting in reduced vessel waiting time and container dwelling time, which would improve the competitiveness of the port, as well as lead to the reduction in freight costs and enhance safety.

He added that transporting freight in transit cargo via the lake transport system reduced the cost of shipment and, by extension, the cost of doing business in the country.

“Not only will it increase transit cargo volume through the lake; we will also expand domestic shipment from the lake and this will serve as a boost for agricultural enterprises within the environs of the lake,” he added.

President Akufo-Addo said other economic benefits of the project included the reduction of pressure on the road network, including the Eastern Corridor roads which are under construction, thereby reducing their early deterioration and increasing their service life span.

In addition, he said, there would be a minimisation of the cost of transporting bulk containers and agricultural produce, as well as the provision of affordable, reliable and alternative means of transporting passengers not served by the road transport system along the corridor.

The Minister of Railways Development, John-Peter Amewu, touted the government's investment in the railway sector within the last six years.

He said the Tema-Mpakadan railway line, which was conceived in 2007 during the tenure of President J. A. Kufuor, was intended to link Tema to Akosombo

He said the railway line was originally proposed to start from the Port of Tema and terminate at the dam at the Akosombo Port, covering a distance of approximately 85km.

However, the terminal point of Akosombo Port was varied in 2017 to Mpakadan due to technical reasons, including the safety of the Akosombo Dam.

The Minister of Roads and Highways, Kwasi Amoako-Attah, expressed excitement at the realisation of the project, stressing that it would complement the road sector and improve socio-economic activities in communities along the corridor.

He said the government had so far constructed 28 grid separated roads along urban and feeder roads to separate roads from the rail lines under an integrated transport planning to prevent accidents.

The Member of Parliament (MP) for Ningo-Prampram, Sam George, said the project was a testament to what the collectiveness of Ghanaians could achieve.

According to him, although the project predated the current administration, the sterling example shown by the President and the government to ensure its completion, irrespective of partisan political differences, was worth commending.

The Paramount Chief of the Prampram Traditional Area, Nene Tetteh Waka III, on behalf of the chiefs and the people of the Prampram and the Shai Traditional areas, expressed appreciation to the President and the government for the interventions in the area.

He said so far about 10 projects had been delivered in the traditional area, for which the people were grateful to the government.