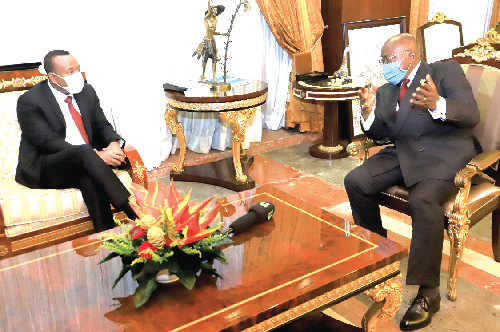 President Akufo-Addo in a discussion with Mr Abiy Ahmed, the Prime Minister of Ethiopia, at the Jubilee House. Picture: SAMUEL TEI ADANO

The talks which were held behind closed-door involved matters of mutual interest and strengthening of existing relations between the two nations.

Addressing the Presidential Press Corp before the meeting, President Akufo-Addo said their discussions would also centre on regional and continental issues.

The Prime Minister is on a three-day working visit to the country.

Mr Ahmed, who is leading a delegation of ministers and diplomats from his country, was met on arrival at the Kotoka International Airport last Tuesday evening by the Vice-President, Dr Mahamudu Bawumia.

Mr Ahmed, who won a re-election bid for another five-year term in his country this year is the first Ethiopian to be awarded a Nobel Prize. He was recognised in 2019 for his work in ending the 20-year post-war territorial stalemate between Ethiopia and Eritrea.

There have been cordial relations between Ghana and Ethiopia since the time of Ghana’s first President, Dr Kwame Nkrumah, and Emperor Haile Selassie.

The President said there was potential for the two countries to expand their cooperation, adding that they would work together to realise their vision.