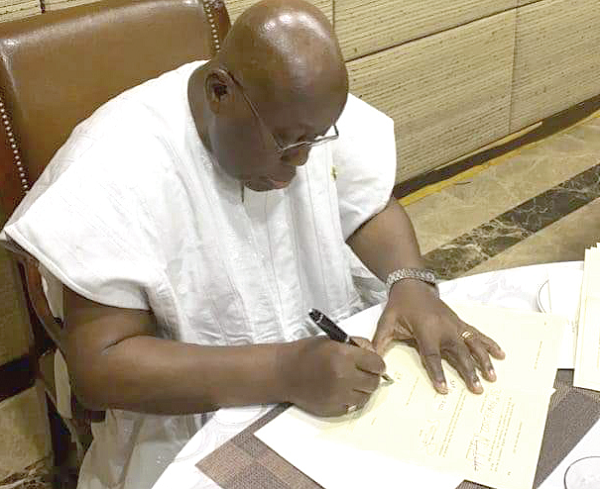 President Akufo-Addo appending his signature to the bill Follow @Graphicgh

President Nana Addo Dankwa Akufo-Addo yesterday assented the Electronic Transfer Levy Bill (E-Levy) Bill into law just before the start of the Cabinet meeting at the Jubilee House in Accra.

By appending his signature to the bill, it has now become law, but the operational date and other activities will be announced by the Minister of Finance, Ken Ofori-Atta.

Parliament approved the bill last Tuesday after the Minority had walked out of Parliament as part of their avowed protest against the bill.
The bill initially imposed a 1.75 per cent tax on all electronic transactions and money transfers, but the rate was reduced to 1.5 per cent before its passage.

The bill, which was first laid before Parliament by the Minister of Finance on November 17, last year, had to be withdrawn because the National Democratic Congress (NDC) Minority in Parliament felt that the First Deputy Speaker, Joseph Osei-Owusu, who was presiding as Speaker, committed an error when he vacated his chair to cast a vote to approve the bill.

That led to a melee and some exchanges, including fisticuffs, on the floor of Parliament, leading to the abrupt adjournment of the House for the Christmas holidays.

Subsequently, the Minister of Finance conducted a series of public consultations, mainly in the regional capitals, to solicit support for the levy, seen as a new major revenue stream for the government.

While consultations were going on, a citizen of Ghana went to the Supreme Court to seek interpretation as to whether a Deputy Speaker presiding over proceedings of the House could cast a vote, to which the Apex Court ruled in the affirmative.

During the lull, there were suggestions that the government should opt for an International Monetary Fund (IMF) programme to achieve policy credibility to create fiscal space for it to borrow to fund its development programmes.

But the government insisted that it was capable of resolving the challenges from within, a position premised on the Ghana Beyond Aid agenda.

Addressing Parliament last Wednesday with the message on the state of the nation, President Akufo-Addo expressed gratitude to the House for the fact that in spite of the protracted and sometimes acrimonious nature of proceedings, it finally found it possible to pass the E-Levy Bill.

“I believe strongly the levy is going to make a significant contribution to revenue mobilisation and the management of the national economy, and I want to thank members of the House for making this possible,” he said.

The approval came after the 137 MPs on the Minority side of Parliament staged a walkout of the Chamber on grounds that they did not want to be associated with any further proceedings on the approval of the bill, which was being considered under a certificate of urgency.

The walkout came after the House had concluded the debate on the bill and the Speaker had put a question on the motion for the adoption of the Finance Committee’s report.

Moving the motion, Mr Ofori-Atta said the government had resolved to take the necessary steps to improve domestic revenue mobilisation and strengthen the competence of the Ghana Revenue Authority (GRA) in assessing electronic tax handles, without compromising the pro-poor interventions of the government.

The minister said the E-Levy had been designed to tap into e-transactions to widen the tax net, help increase the tax per capita ratio and generate the much-needed funds for the country.

“The government is of the conviction that if all the people of Ghana share the burden of domestic revenue mobilisation by equitably contributing their fair share of the taxes, the GH¢100 billion CARES Obaatan Pa programme will successfully transform our economy to realise the President’s vision of a Ghana Beyond Aid, a wiser, wealthier, inclusive and sustainable, empowered and resilient society,” Mr Ofori-Atta stated.