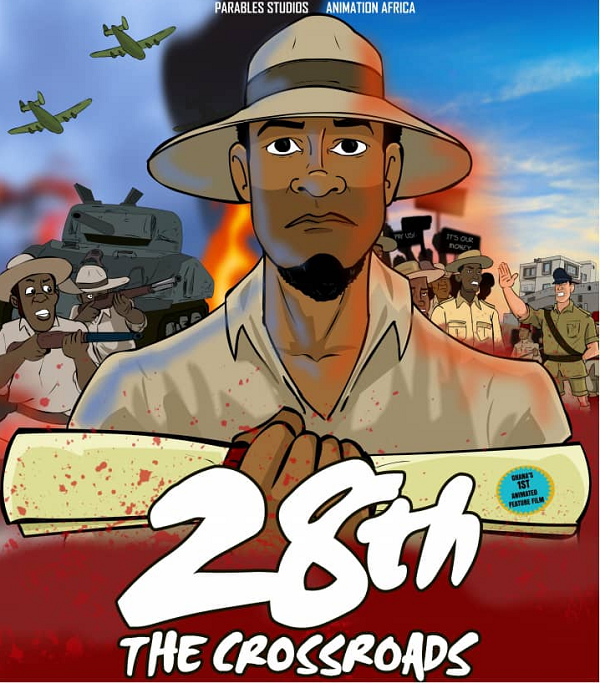 The Deputy Minister of Tourism, Arts, and Culture, Mr Mark Okraku Mantey, has charged players in the creative arts industry to use their arts to preserve Ghana’s history.

For him, the creative arts industry presents a huge platform where players could easily preserve the country’s history for future generations.

Mr Okraku Mantey made the call in a brief remarks before the premiering of an animated film on Ghana’s 28th February, 1948, shooting incident at the SilverBird Cinema in Accra on Monday, February 28, 2022.

The film, titled “28th The Crossroads”, chronicles some of the incidents that preceded Ghana’s independence. It was produced by Samuel Quartey, starring Adjetey Anang; Godson Quacoo; Eldad Wontumi, and Tendai Okraku.

The march on 28 February 1948 was a peaceful attempt by former soldiers who fought on the side of the British during the World War II to bring a petition to the Governor of the Gold Coast requesting the dispensation of promised pensions and other compensation for their efforts during the war.

The ex-servicemen were members of the Gold Coast Regiment, who were among the most decorated African soldiers, having fought alongside British troops in Burma. They had been promised pensions and jobs after the war; however, when they returned home, jobs were scarce and their pensions were never disbursed.

As the group marched toward the Governor's residence at Christiansborg Castle, they were stopped and confronted by the colonial police, who refused to let them pass. The British police Superintendent Imray ordered his subordinate to shoot at the protesters, but the man did not. Possibly in panic, Imray grabbed the gun and shot at the leaders, killing three former soldiers: Sergeant Adjetey, Corporal Attipoe, and Private Odartey Lamptey. People in Accra took to the streets in riot.

Okraku Mantey said government was ready to support any art that promotes the country’s heritage, urging players in the creative arts industry to collaborate on developing major projects such as the animated film.

He disclosed that going forward, government will support initiatives that are in the interest of the country, entreating players in the arts industry “to go into areas such as documenting the country's history.”

He further indicated that government will soon set up the Creative Arts Fund to provide financial support to the players in the creative arts space.

For him, President Akufo-Addo remains committed to the creative arts industry and would not renege on his promise.

Mr Okraku Mantey commended the producers of the film for their creativity in keeping Ghana’s history alive, saying “Ghana is grateful to you for keeping records of history with film.”

The movie, which blended local languages such as the Ga, Twi and Ewe with the English also provided subtitles for easy understanding.

The film was spiced up with comic scenes which sent the audience into laughter incessantly. Many players in the industry came to the venue to see the movie, including British-Trinidadian actor, Rudolph Walker, who is known for his roles as Patrick Trueman in the BBC soap opera EastEnders, and Bill Reynolds in the ITV 1970s.

At the end of the movie, an audience who appeared to have been inspired by the sense of patriotism in the film requested all the patrons at the cinema to sing Ghana’s national anthem, to which the organisers granted.