Policing in the face of COVID-19 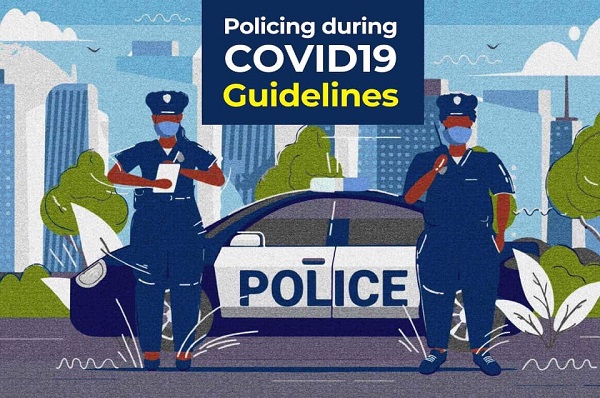 Lance Corporal Daniel Kwofie is a policeman who survived COVID-19. He is now an avid ambassador educating people and speaking out against the stigmatisation of persons who have the virus or have recovered from it.

Kwofie found out about his COVID-19 status on May 19, 2020, after he returned home from night duty. He is quick to share his experience as a COVID-19 positive person. He suspects he could have contracted the disease while at work. "I work as a Domestic Crime Investigator and I might have contracted it from one of the hundreds of persons l come into contact with in my line of work. I may also have contracted it during my daily commute to work as l use public vehicles,” he said.

Kwofie is among the 42,267 people who have recovered from the virus out of the 45,288 affected. Another 285 people infected with the virus have died. Kwofie decided to speak out about his experience to educate people who may think that COVID-19 is a hoax.

He has been urging people he meets on a daily basis to observe the guidelines that have been in force since the virus was reported in Ghana. His message is simple: ‘wash hands frequently, keep physical distance and wear masks in public places.” And he is not alone. The Ghana Police stepped in to join frontline workers in the fight against coronavirus after Ghana announced its first two cases on March 12, 2020.

Unlike other countries such as Kenya and South Africa where the police brutally enforced movement restrictions and curfews sometimes tragically, the police in Ghana, during and post the lockdown, continued to contribute to the fight through what they describe as humanitarian operations. These operations include public education on how to stay safe from COVID-19 at bus terminals and markets and distribution of free water with their water bowsers in informal communities among others.

The Ghana Police Service has also dedicated resources to assist in containing the virus, including setting up major incident rooms for holding suspected cases and setting up specific new task forces such as operation COVID-19 safety.

Even though the police had been complaining of inadequate personnel, they are required to continue carrying out their traditional role of fighting violent threats while they extend their range of duties into helping Ghana win the biological threat. Police to civilian ratio is presently 1 police officer to 848 civilians, falling short of the United Nations (UN) benchmark of one police officer to 500 people.

Restrictions
To curb the spread of COVID-19, President Nana Addo Dankwa Akufo-Addo declared a partial lockdown, which restricted movement of persons in Accra, Tema, Kasoa and Kumasi metropolis for three weeks from March 22, 2020.

In line with the restrictions, all residents in the affected areas were to stay indoors while only essential services providers in the food, pharmaceuticals and banking sectors were exempted. Typically, some people deliberately flouted the directives. This saw the deployment of thousands of police officers of different ranks to areas within the locked-down areas to enforce the restriction.

The men and women in black, as the police are often referred to, worked in shifts of an average of 12 hours day and night. They undertook operations such as blocking major roads and routes leading to lockdown areas, stopping and questioning occupants of vehicles and persons on foot, and assisting persons assigned on contact tracing, testing and treatment. They also evacuated and protected persons in mandatory and self-quarantine.

During the three-week lockdown, about 1,326 persons were arrested for various infractions such as breaching the physical distancing protocols, attempting to travel out of the lockdown areas and illegal entry into the country.

The enforcement of the partial lockdown witnessed scores of confrontations between the police and the public with reports of excesses. There were concerns of the police using brute force during some of the incidents captured on video by eyewitnesses.

For instance, there was a heartbreaking video of an elderly woman crying and claiming she had been whipped by a policeman, in Accra Central, where she had gone to buy food items.

Some police officers also suffered attacks from the public. For instance, Corporal Bernice Osei Owusu had a substance sprayed in her eyes by a (passenger of a vehicle, while a female driver ran over the foot of Inspector Sullemana Jallo Abdullah at a checkpoint. Those who allegedly assaulted the police personnel were arrested and are currently facing the law.

Persons arrested are screened to ascertain their COVID-19 status and are kept in separate cells while suspects of petty crimes are released on bail to decongest the holding cells.

Suspects are also required to give their travel history, undergo temperature checks and undergo screening of other COVID-19 related health symptoms before they are admitted to the cells.

While the police carry out their expected roles in the fight against COVID-19, how protected are they?

Apart from wearing masks and sometimes hand gloves, these police personnel are not seen in any protective equipment. Depending on the type of operation they carry riot controlling weapons, AK 47 rifles which can only put fear in humans but certainly not in the deadly virus.

Because of COVID-19, the Police Administration in collaboration with a private sanitation company, undertook nationwide disinfection exercises of all police stations, barracks and police schools every three months. All police stations have installed hand washing facilities and alcohol-based hand sanitizers for use by personnel and visitors.

Yet, the police, especially those in the operations unit are exposed to the risk of contracting the virus as they discharge their duties on a daily basis. Routinely, they arrest suspects without wearing any hand gloves exposing them to contracting the virus if any of the culprits is positive of the virus. The operational vehicles they use were also left out of the disinfection programme by the Police Administration.

Measures
The Director of Public Affairs of the Ghana Police Service, Superintendent of Police, Mrs Sheila Kese Abeyie-Buckman said 35,000 police personnel led by the Inspector General of Police (IGP) were actively involved in the fight against the pandemic, particularly during the three weeks lockdown.

To ensure safety, she said all police officers were supplied with at least two reusable face masks and other PPE such as gloves while they were educated to follow all necessary safety protocols.

"As front line officers, they were out there so that the majority of the citizenry could stay at home, we were relatively exposed to the disease; the possible exposure also led to possible risk of infecting our families," she said.

Some of the challenges faced by the police, she said included difficulty with finding transport to work and back home and inadequate Personal Protective Equipment (PPE) at the initial stages. Additionally, she pointed out that managing detainees confirmed or suspected to be positive was also a huddle.

Other challenges, Mrs Abeyie-Buckman outlined included police personnel contracting COVID-19 in the course of their work while some officers faced stigmatisation because their colleagues tested positive "and the citizenry labelled all police officers as being positive.

For instance, in Koforidua in the Eastern Region, commercial vehicles refused to commute with police officers in uniform or people in mufti identified as police officers."

In his assessment of the performance of the police in terms of enforcing the law in the face of COVID-19, the Director, Faculty of Academic Affairs & Research of the Kofi Annan International Peacekeeping Training Centre, Prof Emmanuel Kwesi Aning said the police service has copped considerably better than expected taking into consideration the uncertainties the pandemic brings.

This report was supported by the Africa Women Journalism Project (AWJP) in partnership with the International Center for Journalists (ICFJ).