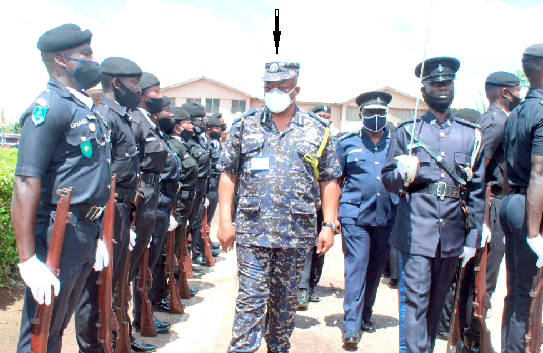 Mr. James Oppong-Boanuh (arrowed) inspecting a guard of honour mounted for him during the visit
30.5k Shares

With 54 days to the general election, the Inspector General of Police (IGP), Mr. James Oppong-Boanuh, has revealed that the police have identified more flash points in the country that require special attention on election day.

He said the additional hotspots, which included Banda and Nkrankwanta in the Bono Region, were identified during the compilation of the new voters register.

Mr. Oppong-Boanuh, who made this known when he visited the Bono Regional Police Command in Sunyani last Monday to assess the command's operational preparedness for the December 7 general elections in the region, gave an assurance that security would be beefed up at those centres on the day of the polls.

During his visit to the regional command, the IGP also interacted with the officers and men of the service to find out some of the challenges they were facing to enable him to respond to them.

Mr. Oppong-Boanuh explained that the visit was also aimed at boosting the morale of the personnel to give off their best in protecting lives and property before, during and after the election.

Speaking to the media, the IGP expressed the determination and readiness of the Ghana Police Service to provide total security before, during and after the December 7, 2020 election to ensure a violence-free conduct of the exercise.

“There will be total security on the election day, especially at the flash point areas before, during and after the December 7, 2020 election,” he stated and assured the public of maximum protection of lives and property.

Mr. Oppong-Boanuh said apart from security officers that would be stationed at the various polling stations, there would be a standby Rapid Response Team (RRT) made up of the police and military to respond to any emergencies.

“When you are doing policing, you look at areas and the challenges that they have. For instance, if you have a polling station at the Sunyani Regional Headquarters, the amount of security you will provide will be normal standard security, but if you have a place such as Banda-Ahenkro or Nkrankwanta ,you will beef up security in these areas,” he explained.

As part of the visit, he also paid courtesy calls on the Bono Regional Minister, Mrs. Evelyn Ama Kumi-Richardson, the Sunyani Traditional Council and other stakeholders to solicit their support to ensure a peaceful election.

It also conducted a full-scale simulation exercise aimed at assessing the preparedness of the officers ahead of the elections.

Mr. Oppong-Boanuh, who monitored the simulation exercise, commended the team for the hard work and encouraged the personnel to have more of such exercises to help increase their skills and ability to deal with criminals when the need arose.