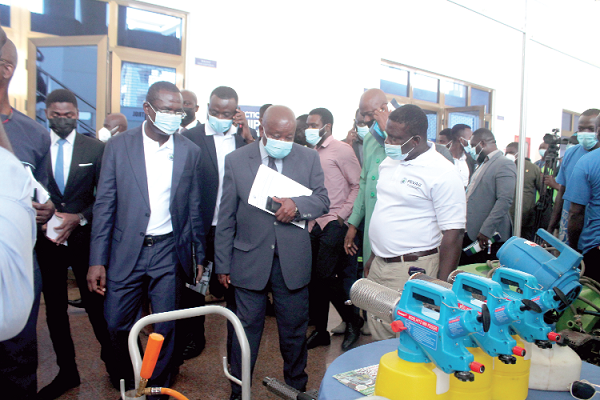 The Pest and Vector Control Association of Ghana (PEVAG) has been inaugurated in Accra.

The association will regulate activities of practitioners in the pests and vector control industry in the country.

It is expected to bring together industry players, ensure standardisation, improve industry operations through capacity building, and solidify efforts of state agencies to combat pest and vector infestation in the various cities.

Inaugurating the association last Tuesday, the Minister of Health, Mr Kwaku Agyeman-Manu, said the ministry would work with other stakeholders to develop a resilient pests and vector control industry for the country in the shortest possible time.

He said recent happenings in the global space had made it imperative for the country to develop a strong and vibrant pest and vector control industry capable of rising to any challenge.

To achieve this, however, he said there was the need for clear policy direction and legislation to properly regulate and streamline the sector, stressing that the ministry was ready to lead the charge.

Mr Agyeman-Manu said the COVID-19 pandemic was a major development that had brought home the need for a strong pests and vector control system.

“COVID-19 has taught us that as a society we need to prioritise ourselves in readiness to combat natural disasters, and not adopt firefighting approaches,” he said.

While praising the founders of PEVAG, the minister indicated that it was also imperative that the pests and vector control space was sanitised by building the capacity of players to respond appropriately and in a timely manner.

He said the capacity building of players would also address the need to streamline the handling and application of chemicals used in the control of the various pests and vectors.

The National President of PEVAG and Executive Chairman of Jospong Group of Companies, Mr Joseph Siaw Agyepong, noted that COVID-19 had given them the experience to fight pandemics.

He expressed PEVAG’s readiness to help the country to fight and prevent diseases caused by vectors and pests.

“The vision of PEVAG is to build the capacity of its members to the highest international standards, and, with the support of the government, development partners and other stakeholders, provide the needed equipment and logistics to provide environmentally friendly services in a safe and healthy manner,” he added.

He indicated that malaria — transmitted by female anopheles’ mosquitoes — was one of the top 10 diseases in the country.

He said PEVAG, as an association, would help to bring professionalism in the sector, and standardise the use of required chemicals to reduce environmental impact of their activities.

The Deputy Executive Director of the Environmental Protection Agency (EPA), Mr Ebenezer Sarpong, explained that pests and vectors were a nuisance that needed to be controlled.

"The EPA requires registration of pesticides and other chemicals used in pest and vector control to ensure that only approved chemicals are used to prevent their damaging effects on the environment," he said.