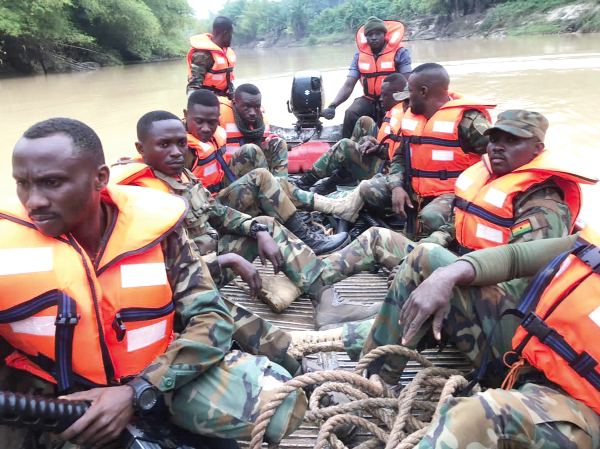 The security team patrolling one of the rivers
30.5k Shares

A team of security men has been deployed to clamp down on illegal mining activities on six major river bodies that have come under heavy attack by illegal miners.

They have the marching off orders to arrest all persons found mining in water bodies and clear the rivers of all mining equipment.

The Chief Executive Officer (CEO) of the Minerals Commission, Martin Kwaku Ayisi, who made this known at a media briefing in Accra yesterday, said the security agencies would permanently patrol those rivers to ensure that galamsey operators were flushed out.

He stressed that unlike the previous strategy which saw the military storm river bodies to flush out illegal miners and return to their base, “this time they will remain permanently there to protect the water bodies".

The press briefing followed a video that has gone viral on social media about illegal mining activities in the Offin River.

In the video, someone is heard saying that people are doing illegal mining in the Offin River and polluting the water.

Mining equipment purported to have been used by the illegal miners could be seen on the river bank.

Responding to the video, Mr Ayisi said the Ministry of Lands and Natural Resources and the Minerals Commission had launched swift investigations to ascertain the facts of the issue for prompt action to be taken.

He warned that ruthless action would be taken against anyone found to be complicit in alleged illegal mining activities on the Offin River.

The CEO called on members of the public to rally round the government to help weed out all miscreants who were still neck-deep in galamsey, despite the numerous interventions that had been rolled out to curb the menace.

"Galamsey affects every one of us as citizens, so tackling it should be a fight by everyone and not only the regulator," he stressed.

While commending the media for blowing the whistle on illegal mining activities, Mr Ayisi said more needed to be done for the nation to come out of the woods.

"We encourage all and sundry, especially the media, to support us by making available any information on illegal mining activities, such as the video in circulation, and such leads will be acted upon with dispatch and integrity," he said.

He stressed that the commission remained unflinching in its commitment to enforce mining laws and regulations to help sanitise the small-scale mining sector.

Touching on what had been done to curb the menace, Mr Ayisi said within the last two years, the government, through the Ministry of Lands and Natural Resources and the Minerals Commission, had introduced several measures to deal with galamsey.

He recounted some of the measures to include the introduction of ‘Operation Halt II’, engagement with relevant stakeholders, revamping of the Community Mining Scheme (CMS), geological investigation of designated areas to identify mineralised areas to be allocated to small-scale miners, as well as the distribution of 100 mercury-free equipment to ensure responsible mining.

"Members of these DMCs are going through capacity-building programmes so that they can help eliminate illegal mining and promote responsible small-scale mining," he said.

Mr Ayisi added that it was in an effort to effectively deal with illegal mining in water bodies that the Minister of Lands and Natural Resources, Samuel Abu Jinapor, recently commissioned five speed boats to help the Ghana Navy patrol the Ankobra, Pra, Offin, Birim and Black Volta.