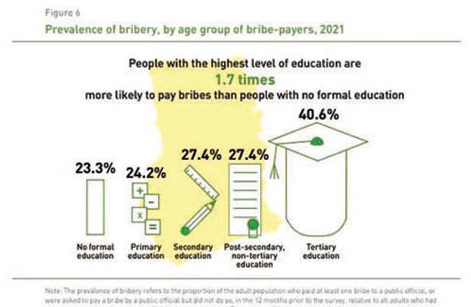 People with higher levels of education are more likely to pay bribes than those without formal education, a Ghana Integrity Public Services Survey (GIPSS) report has revealed.

The GIPSS is a national representative population-based survey that provides internationally comparable measures of corruption.

The report covered the scope of bribery, who takes bribes, how bribery works, gender dimensions, nepotism and vote buying in the country.

The Commission on Human Rights and Administrative Justice (CHRAJ), in collaboration with the Ghana Statistical Service (GSS), commissioned the study, with support from the UN Office on Drugs and Crimes (UNODC).

The report also revealed that there was a strong association between the employment status of bribe payers and the prevalence of bribery.

It explained that roughly 37 per cent of people with salaried positions in the public and the private sectors paid bribes or were asked to pay bribes in 2021.

The lowest prevalence of bribery was among those who did not have salaried positions, such as the retired and housewives or housekeepers, it added.

The report further observed that exposure to bribery differed across the country’s population.

It said some population groups were more susceptible than others to paying bribes to public officials, and that people who paid bribes often had more than one contact with the public officials in question.

The report said there was little difference between the bribes paid by people in the urban areas and those in the rural areas.

“In 2021, more than 17.4 million bribes were paid in Ghana, showing the magnitude of administrative bribery in the country,” it added.

It also said 29.3 per cent of the respondents reported they had paid bribes only once, whereas 17.6 per cent said they had paid more than 10 bribes in the 12 months prior to the survey.

The report also said bribes paid to public officials usually came in cash, food and drinks, valuables, animals and exchange for another service or favour.

Food and drinks were, however, more common forms of bribe payment in the rural areas than in the urban areas.