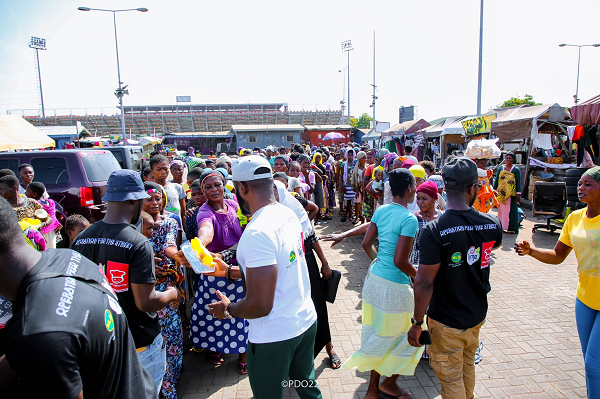 The PDO Foundation in collaboration with the Charity Arm of NLA and supported by Verna Mineral Water has embarked on the third edition of Operation Feed the Street.

Prince David Osei told the Graphic Showbiz that it is his own way of giving back to society and reaching out to the destitute.

On Good Friday, he made donations to the Potters Village Orphanage at Dodowa and fed people on the streets from Odorna, Circle through to Tema Station with food, drinks, water and gave them other humanitarian supplies.

According to Osei, his team fed about 1500 people on Good Friday and they repeated the gesture on Easter Monday, “The street folks were visibly excited and they kept thanking us for the kind gesture,” he said.

On the second day of Operation Feed the Street which was on Easter Monday, Prince David Osei joined folks at Nima to break the Ramadan fast, “I joined my brothers at the Shai Central Mosque in Nima to break the fast where I made donations of food, drinks and water,” he said.

According to Osei, he will be visiting the Royal Seed Orphanage at Kasoa for same donations as he did at the Potter’s Village Orphanage in Dodowa to climax the third edition of Operation Feed the Street.

He expressed gratitude to his sponsors, the Charity Arm of NLA and Verna Mineral Water for being very supportive of his Operation Feed the Street project, “We have been doing this for the past three years and we will do it every year God willing.

“It is always so gratifying to see the smiles on the faces of these underprivileged people when we reach out to them, it sometimes brings tears to my eyes and I am so thankful that I am in a position to help them with the support of my able sponsors,” he stated