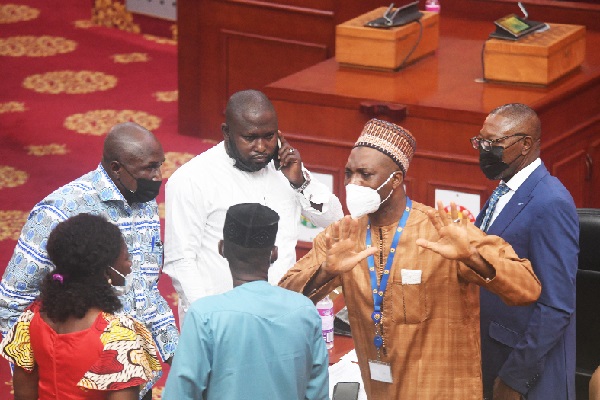 Parliament reconvened yesterday for the commencement of the First Meeting of the Second Session of the Eighth Parliament of the Fourth Republic.

Consideration of the Electronic Transaction Levy ( E-Levy) Bill, 2021, which made the House to adjourn proceedings abruptly on December 21, last year was not on the Order Paper for the day when the House reopened for business.

The Majority Leader and Chairman of the Business Committee of Parliament, Mr Osei Kyei-Mensah-Bonsu, during the presentation of the Business Statement to the House, said the Minister of Finance was undertaking further engagements with stakeholders and sections of the public in respect of some concerns raised about the bill.

As a result of that, he said, the committee had programmed the bill for consideration during the second week, beginning from Tuesday, February 1 and ending on Friday, February 5.

He, therefore, encouraged members to participate fully in the consideration and conclusion of the process of the passage of the bill for the benefit of the economy.

The Minority Leader and Member of Parliament (MP) for Tamale South, Mr Huruna Iddrisu, however, disagreed and said the E-Levy should have been part of the Business Statement of the House for the first week.

He argued that the bill was now in the bosom of Parliament and, therefore, it should have been part of the Business Statement for the first week of the meeting of the House.

But the Speaker, Mr Alban Bagbin, who presided, intervened and said there was nothing wrong with the Finance Minister engaging in further consultations with stakeholders, for which reason the House should go by the scheduled programme by the Business Committee.

The MP for Asawase, Mr Mubarak Mohammed Muntaka, was made to withdraw an unparliamentary word he had used during the deliberations on the E-Levy programme.

The House adopted the Business Statement for the first week, after they had deliberated on it.

State of the Nation Address

During the deliberations, Mr Samuel Okudzeto Ablakwa, the MP for North Tongu, said no specific date had been given by the Leader of Government regarding the State of the Nation Address (SONA) that was expected to be presented by the President.

Mr Kyei-Mensah-Bonsu, in his response, said the leadership of Parliament, including the Speaker, would take a decision on the appropriate date for the SONA.

The President, at the beginning of every year, is expected to present the SONA to Parliament.

The first meeting of the House is expected to be demanding, as about 68 bills are to be presented to Parliament; instruments being processed to be delivered to the House are about 80, while 400 questions have been filed and indications are that the number will go up as MPs have returned from their constituencies.

The Speaker, who appeared in a traditional attire in the House, in welcoming the MPs back from the break, reminded them to always to place the national interest and the well-being of the people that they represented ahead of any other interest.

He gave an assurance that as the Speaker, he would enforce the code of ethical behaviour in the House to avoid the recurrence of the unfortunate incident that happened in Parliament during the consideration of the E-Levy.

"Although I was not in the seat on that day, I had delegated roles and, therefore, I take full responsibility for what happened and apologise to the whole nation," he said.

Mr Bagbin urged MPs to endeavour to engage in debates on the floor of the House with respect, decorum and civility.

He further urged members to shed their partisan and party interest in their deliberations in the House and always place Ghana first.

He said the hung Parliament in which they found themselves must produce dialogue, cooperation, consultation, compromises and consensus-building.

Commenting on the change in his official outfit, the Speaker said he wanted to promote made-in-Ghana and present the uniqueness and the cultural diversity of the country, hence his decision to do away with the gown and hat for the normal business of the House.

He explained that inspiration to replace the colonial attire with the traditional way of dressing was from the first President of Ghana, Dr Kwame Nkrumah, and the founder members of Parliament in the First Republic.

"Parliament is a unique made-in-Ghana product and we must showcase and market it well as a brand," he added.

Mr Bagbin encouraged MPs to emulate him by also presenting themselves in their traditional apparel for parliamentary business.

Both the Majority and the Minority leaders in Parliament took turns to welcome their colleagues back from the recess and called on them to conduct themselves very well on the floor of the House during deliberations in order to set a good example for young Ghanaians who aspired to be MPs in the future.

Mr Kyei-Mensah-Bonsu, who is also the MP for Suame, and Mr Iddrisu both used the opportunity to offer unreserved apologies to Ghanaians for the unfortunate incident that happened in Parliament during the voting to consider and pass the E-Levy Bill that later turned into fisticuffs.

The Majority Leader said Parliament was a House of Debate from informed positions and not the display of brawl power.

He also called for greater consensus-building and reconciliation in the House.

Mr Iddrisu, for his part, pledged that the Minority would support efforts by the Speaker to strengthen Parliament to deepen its oversight responsibility and also the government to improve the quality of life of the citizenry.