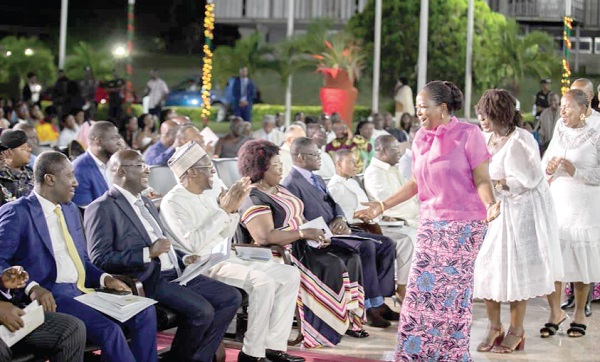 Vice-President Dr Mahamudu Bawumia (2nd from left) and Alban Bagbin (3rd from left), the Speaker of Parliament, with some of the dignitaries at the event in Accra
30.5k Shares

Parliament last Monday night held its annual Festival of Nine Lessons and Carols at the Forecourt of the Speaker’s Block in Parliament.

The well-attended event was held under the patronage of the Speaker of Parliament, Alban Sumana Kingsford Bagbin.

It attracted people from all walks of life, who joyfully sang to praise and thank God for His mercies and protection this year.

Others were the Finance Minister, Ken Ofori-Atta; a member of the Council of State, E. T. Mensah; a Justice of the Supreme Court, Justice Emmanuel Yonny Kulendi, Members of Parliament, members of the Diplomatic Corps, as well as the clergy.

The masters of ceremony (MCs) were Francis Xavier Sosu, the MP for Madina, and Dakoa Newman, the MP for Okaikwei South.

There were three choir groups — the Parliamentary Service Choir, the Tema Youth Choir and the Grace Chorale International — who delivered some melodious festive season songs that ignited the atmosphere.

They sang carols such as ‘12 days of Christmas’, ‘The coming of the Lord’, ‘A classical Christmas’, ‘Anwanwasem bi a m’atse’ and ‘Enuonom Afepa’, a medley of Christmas highlife, which attracted the guests to the dance floor.

Leading the dance was the Speaker, who also went round to exchange pleasantries with some of the dignitaries.

A Gospel artiste, Luigi McClean, later took over the stage to deliver thanksgiving songs such as ‘Me de bema wo, m’akoma ye wo dea’, ‘Me hwe dea woaye a, wo se ayeyi’ and ‘Glory be to God in the highest’, which moved Mr Afenyo-Markin and Dr Avedzi to do the ‘Agbadza’ dance, to the admiration of all.

Earlier, the dignitaries had taken turns to read the nine lessons.

The Registrar of the University of Professional Studies, Accra (UPSA), Dr Koryoe Anim-Wright, read the third lesson from Isaiah 9:2 and 6-7 (The prophet foretells the coming of the Saviour), with the Dean of the School of Engineering Sciences of the University of Ghana, Legon, Prof. Elsie Effah Kaufmann, who is also the National Science and Maths Quiz Mistress, reading the fourth lesson.

The fifth lesson, from Luke 1:26-38 (The angel Gabriel salutes the blessed virgin Mary), was read by Dr Avedzi, with the sixth lesson, Luke 2: 1-7 (The Messiah is welcome in a manger), being read by Mr Afenyo-Markin.

Justice Kulendi read the seventh lesson from Luke 2: 8-18 (The visit of the shepherds), while the Speaker read the eighth lesson from Matthew 2:1-12 (The wise men worship the newborn King).

The Vice-President read the ninth lesson from John 1:1-14 (St John unfolds the mystery).

The Director of Programmes of the Anglican Diocese of Accra, Rev. Akua Ofori-Boateng, reminded the people that the moment anyone was called to public service, “we no longer live for ourselves”.

“In fact, God has called us to do right, even if it offends our friends, family and our political class.

“If, in administrating our legislative duties, we refuse to take up the cross of diligence and actually read through the laws that have been set before us to ensure that they are in the interest of the citizenry of our country, then we are not worthy of God,” she said.