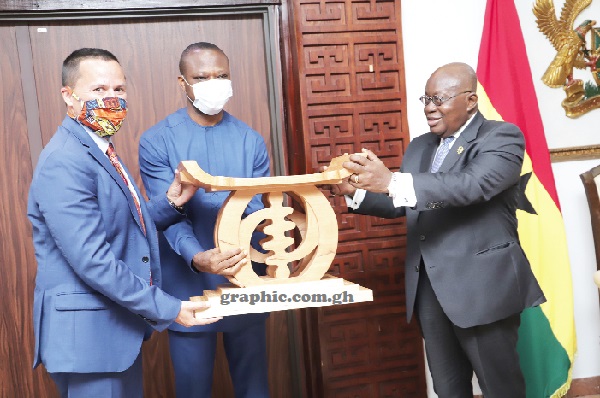 The outgoing Australian High Commissioner to Ghana, Mr Gregory Andrews, has singled out Ghana’s Minister of Lands and Natural Resources, Mr Abu Jinapor, as the best minister in the current administration.

He said the determination and commitment to enforce good mining practices, especially in establishing sustainable mining to secure the environment, was remarkable.

Mr Andrews stated this when he called on President Nana Addo Dankwa Akufo-Addo to announce the completion of his tour of duty in the country.

He indicated that his outfit had also been supporting sustainable mining in the country where he recently launched sustainable mining with Mr Jinapor, adding that “if there was a prize for Ghana’s best minister, I think he will be eligible for it”.

Mr Andrews said Mr Jinapor had not only been developing legitimate mining which, he said, was crucial for Ghana’s economy, but had also been tackling illegal gold mining with the support of the President.

He made reference to Mr Jinapor’s views at a recent mining dialogue to the effect that illegal mining destroyed the environment, water bodies and many others.

Mr Andrews noted that he had been enjoying the genuine warmth of humanity in the welcome of the Ghanaian and had the opportunity to donate blood on three occasions, saying literally his blood was running through three different Ghanaians.

He said he had also spent a lot of time volunteering at Chorkor in the Greater Accra Region with Basic International Organisation.

President Akufo-Addo said Mr Andrews’ stay in Ghana had been short but full of activities, stressing that it had helped to cement the already strong relationship between the two nations.

He said what Ghana was looking up to was stronger economic ties and bilateral trade between the countries and their business communities.

He noted that Mr Andrews was active and vocal on several issues.

“I think that people have appreciated the dynamism of your representation,” President Akufo-Addo said.

“The legacy you are leaving, that is keeping three Ghanaians alive, had cemented your role and place in the history of our country. We thank you,” the President added.