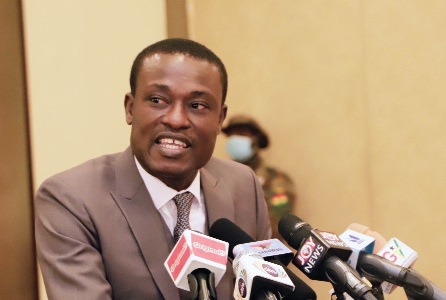 The Office of the Special Prosecutor (OSP) has dragged the Chief Executive Officer (CEO) of the Northern Development Authority (NDA), Sumalia Abdul-Rahman, two of his deputies, and a businessman to court for allegedly bloating a contract sum from GH¢5.72 million to GH¢10.4 million.

The said contract was for consultancy services for the execution of a series of poverty alleviation projects in the 11 constituencies in the Upper West Region.

It was based on the Infrastructure for Poverty Eradication Programme (IPEP), an initiative by the government as part of its “One constituency, one million dollar”, an agenda to spur development and reduce poverty in the 275 constituencies in the country.

Deputy CEO of NDA in charge of Operations, Abdul-Rahman; the Deputy CEO (Finance and Administration), Stephen Yir-eru Engmen; Patrick Seidu, and the businessman, Andrew Kuundaari, CEO of A&QS Consortium Limited, have been charged with conspiracy to influence the procurement process to obtain an unfair advantage in the award of a procurement contract.

The CEO of the NDA and his two deputies have also been charged separately with one count of influencing the procurement process to obtain an unfair advantage in the award of a procurement contract, while Mr Kuundaari is facing two counts of the same offence.

A statement released Tuesday, January 24, 2023, and signed by the Special Prosecutor (SP), Kissi Agyebeng, said the four accused persons would be put before the Tamale High Court on Tuesday, January 31, this year to answer for their alleged crimes.

The OSP decided to prosecute the four persons after it conducted an investigation, triggered by a complaint by a private legal practitioner, Martin Kpebu.

According to the OSP, its findings showed that the three top officials of the NDA and the businessman teamed up to inflate the contract sum without lawful authority.

It said the accused persons did, thus, by increasing the approved procurement total contract sum GH¢5.72 million by an amount of GH¢4.68 million to an amount of GH¢10.40 million, without lawful authority.

The NDA, the report said, was to undertake projects in the 57 constituencies in the Northern Zone, valued at GH¢266.76 million, with consultancy works worth about GH¢29.64 million.

In view of the approval by the Ministry of Finance, the then Acting CEO of NDA, Dr Majeed Abdul-Haroun, on August 29, 2019, requested approval from the Public Procurement Authority (PPA) to grant the consultancy contract to A&QS Consortium Limited and another firm.

The request, which was granted by the PPA, was to award A&QS Consortium consultancy services in 41 out of the 57 constituencies across three regions in the Northern Zone, with the contract valued at GH¢21.32 million (GH¢520, 000 per constituency).

According to the OSP, in December 2019, the government terminated the appointment of Dr Abdul-Haroun and at the time he left office, the NDA had not executed the contract with A&QS and the other consulting firm.

The investigative report by the OSP revealed that on December 13, 2019, Dr Alhassan Sulemana Anamzoya, was appointed as the acting CEO of NDA, and upon assumption of office, he decided to review the un-executed contract for better efficiency.

As part of the changes, Dr Anamzoya added more consultancy firms and limited each firm to one region to avoid saddling of regions “and fast-track the progress of work.”

In view of that, A&QS was limited only to the Upper West Region, with the constituencies allocated to it reduced from 41 to 11. The contract sum thus reduced from GH¢21.32 million to GH¢5.72 million.

“Consequently, by a letter dated 15 January 2020, NDA requested PPA for approval to amend the initial approval dated October 17, 2019 for the implementation of the IPEP at a total cost of GH¢29.64 million),” the report said.

It added that by a letter dated January 19, 2020, PPA granted approval to the application by NDA to amend the number of the consulting entities and the number of constituencies allotted initially to A&QS.

After the said approval by the PPA, the OSP said Dr Anamzoya duly executed the new contracts with all the various consulting firms, including A&QS Consortium Limited, from January 31 to March 31, 2020.

“The stated total contract sum in that invoice was seemingly plucked out of the air by Mr Kuundaari, without any reference to the actual contractual relationship between NDA and A&QS,” the OSP report stated.

“Mr Kuundaari’s submission of the invoices was born of mischief. The invoices were the building blocks of a carefully staged design to directly and indirectly influence the public procurement process to obtain an unfair advantage in the award of a procurement contract by NDA to A&QS under the IPEP,” the OSP said.

According to the OSP, Dr Anamzoya refused to honour the invoices sent by Mr Kuundaari, and when he (Dr Anamzoya) requested further particulars and justification, the A&QS CEO could not provide any.

The OSP said Dr Anamzoya was relieved of his post and replaced with Mr Abdul-Rahman who took office as Ag. CEO of the NDA on August 2, 2021.

The OSP said Mr Abdul-Rahman, with the tacit support of his two Deputies – Engmen and Seidu — approved the invoices submitted by Mr Kuundaari, despite cautions from other staff of the NDA, including the procurement and budget officers.

“Mr Abdul-Rahman and his two deputies were cautioned by relevant staff of NDA that the invoices submitted by Mr Kuundaari on behalf of A&QS were incompatible with the PPA approved contractual relationship between NDA and A&QS,” the OSP said.

The investigative report further revealed that Mr Kuundaari presented a fictitious document supposedly signed by Dr Anamzoya, which showed that the contract sum was GH¢10.4 million, to support the invoice approved by Mr Abdul-Rahman.

“The document Mr Kuundaari attached to the June 26, 2020 and the May 27, 2021 invoices was misrepresented and passed off by him to be the contract bearing the date of January 28, 2020 and executed on the same date by Dr Anamzoya on behalf of NDA and by Mr Kuundaari on behalf of A&QS.

It added that there was absolutely no explanation or justification in the document itself as to the increment of the contract sum beyond the amount approved by PPA.

“The NDA neither sought nor obtained PPA approval for the stated increased contract sum of GH¢10.4 million,” the OSP added.