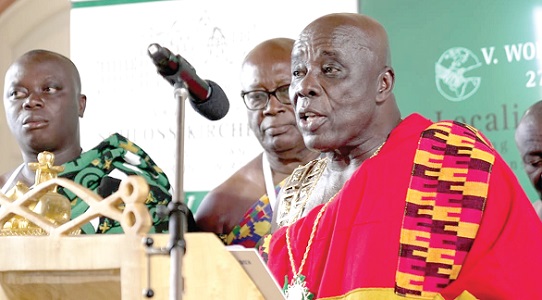 The Okyenhene, Osagyefuo Amoatia Ofori Panin, has called for the empowerment of women at all levels of development to help achieve the UN Sustainable Development Goals (SDGs).

With women making up more than half of the world’s population, he said, no economic growth paradigm within the context of the SDGs could be achieved without their empowerment and participation in the growth process.

The Okyenhene also said women constituted majority of the labour force in the agricultural sector and other businesses, hence the need to provide them with opportunities to unearth their full potential and contribute to national development.

The four-day forum is on the theme: “Localising SDGs: Creating a global network of regions on organic soil”.

It is aimed at localising the implementation of the SDGs and also focuses on building a global network of SDG regions to facilitate local anchoring of the 17 goals.

According to the Okyenhene, there were still acts of oppression against women, saying in some countries they were even “unwanted, unwelcome and unaccepted. Female children do not have the same access to education, health care or vocational opportunity as boys”.

“If the world is serious about promoting justice and reducing poverty, the question of women in development and leadership should be given more attention,” he added.

Speaking on the role and contribution of women in the promotion of indigenous organic agriculture, the Osagyefuo Ofori Panin said women were responsible for about 60 to 80 per cent food production in developing economies.

“Women are generally disadvantaged in productive assets, ownership of land and control of productive inputs, including access to credit.

“Women have been the brain behind organic agriculture in our part of the world, yet women farmers make less money than their male counterparts,” he added.

He was, however, happy that wage discrepancies that existed between women and men were being mitigated by higher value of organic foods.

Recognising the way leaders were trustees of future generations, the Okyenhene called for the active involvement of young people in matters that affected their well-being.

“All of us must care about inter-generational equity and justice,” he said, and appealed to leaders, parents and guardians to help protect, plan and shape a better future for young people.