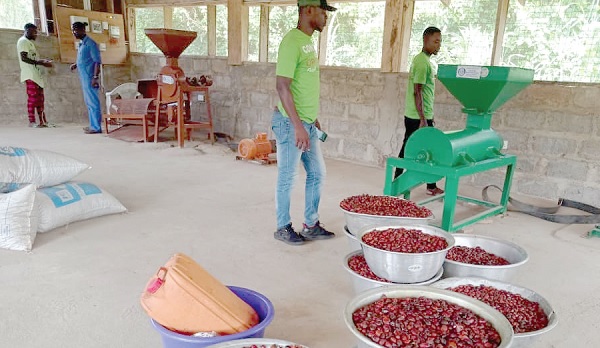 Palm fruits ready for test processing at the plant at Honuta
30.5k Shares

The project which will cover a total of 2,000 acres will involve 200 farmers in Dzolo, Awudome, Dededo and other communities.

The District Director of Agriculture, Seth Rashid Asuo, disclosed this to the Daily Graphic at Dzolo-Kpuita, the district capital, yesterday.

“It is encouraging to note that 30 per cent of the farmers are women,” he said.

Mr Asuo said the production of the mass seedlings was taking place solely at the Dzolo-Kpuita nursery, adding that they would be sold to the farmers at a subsidised price.

Ready markets
According to him, the oil palm expansion project would be carried out in collaboration with the Ghana Export Promotion Authority (GEPA) to ensure ready markets for the produce.

Mr Asuo said there were highly bright prospects for the project with guaranteed economic yields in four years.

He said the project targeted ready markets in Europe in the preference markets in the United States of America due to the proximity of the former.

“The oil palm extension project will definitely transform the lives of the people in the Ho West District and even beyond,” he added

The District Director of Agriculture said the highly fertile soils in the area would ensure huge harvests of oil palm and decent incomes for the farmers.

Meanwhile, Mr Asuo said a modern palm oil processing plant had been installed at the border community of Honuta to process the oil palm for export.

He was silent on the production capacity of the plant but said it was a major breakthrough for the project. “The test running of the plant is taking place now,” Mr Asuo said.

Cashew
In a related development, he said, a community cashew production for export project was set to take off in the Abutia enclave.

He said 37 farmers had been recruited and the 45,000 seedlings were being produced for that project.

When contacted, the Volta Regional Director of GEPA, Chris Amponsah Sackey, described the project as highly viable and gave an assurance that GEPA would constantly be in touch with the farmers to identify and promptly address their specific needs on the project, to ensure its success.