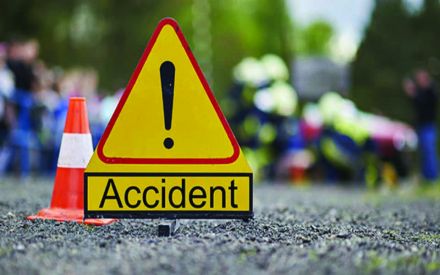 A nursing mother believed to be in her 40s died on the spot when the vehicle she was travelling in ran into a parked cargo truck at Gomoa Mpota on the Accra-Cape Coast Highway early yesterday morning.

It occurred a few metres away from the spot of a similar accident last Sunday in which four females and six males died.

Information gathered from eye witnesses said the cargo truck developed a fault and parked along the road but the driver unfortunately failed to put a road sign behind the truck to serve as a warning to other drivers.

Unfortunately, the KIA truck burst one of its tyres and crashed into the motionless cargo truck resulting in the accident around 5a.m.

The driver of the KIA truck, together with the two year-old son of the deceased ,who survived the accident, and are to be identified, were rushed to the Winneba Trauma and Specialist Hospital to receive emergency medical attention.

The body of the deceased has been deposited at the morgue of the same health facility for preservation and postmortem.

Confirming the incident to the media, the Winneba Municipal Commander of the Ghana National Fire Service (GNFS), DO1 Henry Asiedu, said that one of the tyres of the Nissan truck burst and the driver lost control of the vehicle before running into the stationary cargo truck.

He noted that personnel from the GNFS together with their counterparts from the police service rushed to the scene to rescue the injured and to free the main road of the gridlock that occurred as a result of the accident.

When contacted, the Winneba Municipal Commander of the Motor Traffic and Transport Department of the Ghana Police Service, Assistant Superintendent of Police (ASP), Mrs. Bertha Boguu, said that the injured were currently responding to treatment at the hospital.

Meanwhile, the police have commenced investigation into the matter.

The Daily Graphic, last Monday, reported on a similar accident which occurred at Gomoa Mampong on the Accra-Cape Coast Highway.

Both drivers overtook the wrong way, resulting in a head-on collision leading to the accident.