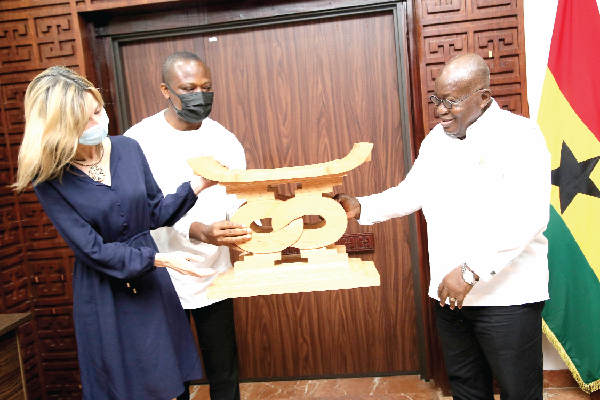 President Nana Addo Dankwa Akufo-Addo has described the duty tours of the Norwegian and Spanish ambassadors in Ghana as fruitful.

He said their contributions led to the enhancement of relations between their individual countries and Ghana.

The President added that the two ambassadors ensured that the cooperation between Ghana and their countries were taken a notch higher and commended them for their dynamism.

President Akufo-Addo made the comments when the Norwegian Ambassador to Ghana, Mr Gunnar Andreas Holm, and that of Spain, Ms Alicia Rico Pérez del Pulgar, bade him farewell at separate occasions yesterday at the Jubilee House.

They are both leaving Ghana after a four-year duty tour. Coincidentally, the day was Ms Pulgar’s birthday.

During his discussion with Mr Holm, the President indicated that Ghana had seen an enhancement and strengthening of relations between the two countries since he assumed his role in Ghana.

He mentioned some of the highlights as the high-level visits of Vice-President, Dr Mahamudu Bawumia, the Finance Minister, Mr Ken Ofori-Atta, and he (President Akufo-Addo) were able to pay official visits to Norway with the Norwegian Prime Minister, Ms Erna Solberg, also coming to Ghana.

“Your period here has been a dynamic one with the relations between the two countries enhanced and a lot had to do with you,” he added.

President Akufo-Addo called for the establishment of a formal vehicle for political consultations between the two countries in periodic formal engagements to exchange views and other issues at the level of technical and leading functionaries of the state.

President Akufo-Addo and the Norwegian Prime Minister were appointed by the Secretary General of the United Nations, Dr Antonio Guterres, to serve as Co-Chair of the Eminent Group of Sustainable Development Goals (SDGs) Advocates.

The President said he had enjoyed co-chairing the SDGs with the Norwegian Prime Minister, particularly, with her inspiring nature.

President Akufo-Addo said the economic relations between the two countries had increased significantly and expressed the hope that that would be deepened in the years ahead.

He stated, for instance, companies such as Aker which had a good reputation with their simple way of doing things particularly in the oil industry.

During interaction with Ms Pulgar, President Akufo-Addo described her as one of those diplomats who left good imprints on the countries they went to, adding that: “We have seen a strong growth in the relations between the two countries in the period you have been here”.

“You are going away with your head held very high that in your period Ghana-Spain relations have gone up a further degree. You’ve done a good job for your country in coming to promote Spanish interest in Ghana,” he said.

President Akufo-Addo recalled his visit to Spain which he said fell on his birthday. He was also able to meet the Prime Minister and had fruitful discussions.

He said the outgoing ambassador had been active and positive in promoting relations between the two countries and commended her for the special initiates in several spheres, including educational scholarships that had been offered to Ghanaian students.

He also mentioned the COVAX initiative which Spain had been supporting and said the shortage of vaccines had been a problem for some countries such as Ghana but was hopeful that there was light at the end of the tunnel to vaccinate the rest of the population.

Mr Holm, for his part, said he was feeling bad because he and the wife were leaving a country they had enjoyed and made good friends, but was excited to be moving to another African country, Kenya.

The envoy said they travelled across the country and enjoyed the beautiful scenery and highlighted his stay to be the ability to develop and strengthen the bilateral ties with Ghana.

Ms Pulgar said her stay had deepened the Ghana-Spain relations.

He said President Akufo-Addo represented that new Africa that was why he was invited to the Focus Africa launch in Spain.

She added that they were able to strengthen the political dialogue which culminated in high-level visits.