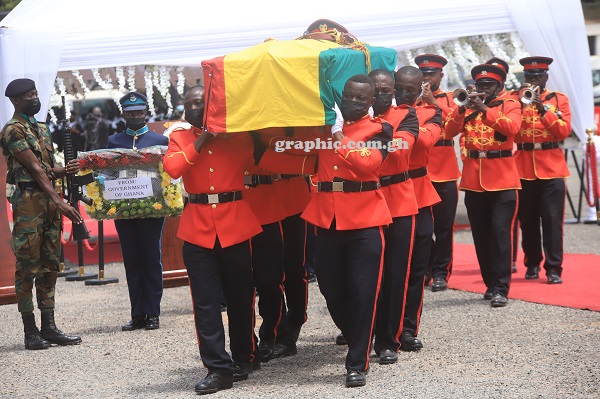 • Remains of the late Joshua Hamidu being carried for interment at the Burma Camp Military Cemetery
30.5k Shares

Also present at the state burial of Lt. Gen Hamidu who died on February 1, this year, was former President, John Dramani Mahama, the Vice -resident of Liberia, Mrs Jewel Taylor, all the serving service commanders and some former colleagues, traditional leaders and a section of Ghanaians.

Draped in the national flag, the casket containing the remains of the former General was placed at the forecourt of the State House with full military honours.

With the strict adherence to COVID-19 protocol, people were allowed to file past and pay their last respects.

Most of the mourners, including President Akufo-Addo and the wife, Mrs Rebecca Akufo-Addo; the widow, Mrs Hassana Hamidu, the children of Lt General Hamidu as well as some family members, wore white attire for the funeral service.

Tributes were read to eulogise the former CDS who also served as National Security Co-ordinator, Chairman, Narcotics Control Board; and Ghana’s High Commissioner to Nigeria at different times of his career.

In her tribute, Mrs Hamidu said their 52-year relationship was marked with some tough times and love and mercy from God coupled with a humorous banter.

“My fighting partner, my love, I shall forever miss you. You are at rest in the Lord’s presence. That gives me peace”.

Preaching the sermon, the Presiding Bishop of the Methodist Church Ghana, Most Rev. Dr Paul K. Boafo, said in the midst of death and pain, the Christian must look up to God and the creator of the universe.

Rev. Dr Boafo used the quote from Job 1: 21 which read: “And said, Naked came I out of my mother's womb, and naked shall I return thither: the LORD gave, and the LORD hath taken away; blessed be the name of the LORD,” for his sermon.

He said when calamity befell Job, he never sinned by blaming God, but stressed that life was a gift from God.

The Presiding Bishop thus explained that the life of General Hamidu was a gift from God to his family, the Ghana Armed Forces and Ghana.

He said the family should be consoled that the General knew the Lord and had been called by his Maker.

After the burial service, the casket containing the remains was carried by military men into a waiting black Ghana Armed Forces Benz hearse, with some six officers, three on each side.

The procession which was led by the Ghana Armed Forces Band then headed for the Burma Camp Military Cemetery for a private burial.

According to the biography published in the Order of Service, General Hamidu was born on September 15, 1936 in Sunson in Yendi District in the Northern Region to Sunson-Naa Hamidu Dramani and Princess of the Gusheigu Royal/ Kaashegu House, Sanata Iddi, popularly known as San Gushiegu.

After passing out as a cadet officer with Intake Eight, he and other West Africans went for further military studies in the United Kingdom in 1957.

From March 1962, he trained in various fields of intelligence in Israel and upon his return he was posted to help form the Intelligence Corps of the Ministry of Defence.

The General was appointed and asked to set up and became the first Commandant of Ghana’s own Command and Staff College in 1976. He fell out with the Acheampong Regime because of the UNIGOV and he was sent to Zambia as High Commissioner with concurrent accreditation to Mozambique, Lesotho, Swaziland, and Botswana.

In June 1979, junior ranks rebelled and locked up all senior officers from Major to General in the guardrooms. They set up their own Revolutionary Council and requested General Hamidu to take over as head of state, but he declined.

He retired from the Ghana Armed Forces in August 1980 and left the country, he returned in 1999 and supported the bid of the New Patriotic Party to ensure the victory of President John Agyekum Kufuor.

He was subsequently appointed as the National Security Advisor and went on to serve in other roles.