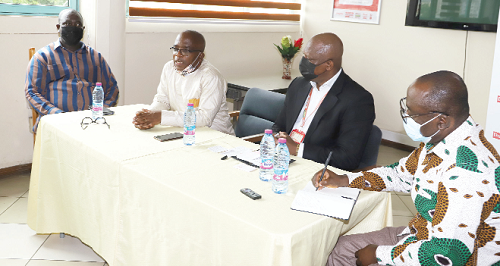 Mr Yaw Boadu-Ayeboafoh (2nd from left), Chairman of the National Media Commission, speaking at the meeting in Accra. Those with him are Alhaji Mohammed Yusuf Twumasi (right), a member of the Board of Directors of the GCGL; Mr Ato Afful (2nd from right), Managing Director, GCGL, and Mr George Sarpong (left), Executive Secretary of the NMC. Picture: GABRIEL AHIABOR

The National Media Commission (NMC) has commended the Graphic Communications Group Limited (GCGL) for churning out insightful and self-initiated stories that have made its publications continue to lead the media industry and set the agenda.

The commission noted that the GCGL and its flagship newspaper, the Daily Graphic, had been able to shift from recycling old stories to results-oriented journalism, for which reason it must be patted on the shoulder.

The Executive Secretary of the NMC, Mr George Sarpong, and a member of the commission, Mr Roland Affail Monney, made the commendation during a stakeholder meeting at the GCGL Head Office in Accra yesterday.

The NMC, led by its Chairman, Mr Yaw Boadu-Ayeboafoh, met with the GCGL Board and its Executive Management team to, among other things, get a feedback from the GCGL Board and the management regarding the two-year stewardship of the board, chaired by Prof. Kwame Karikari.

Mr Monney, who is the President of the Ghana Journalists Association (GJA), was the first to make the commendation, observing that the current Editor of the Daily Graphic, Mr Kobby Asmah, had led his team in the Editorial Department to steer away from the publication of ordinary stories to good content, focusing on “self-initiated” stories.

He said stories such as: ‘The invasion of streets’, ‘Non-functional traffic lights’, ‘Theft on the new Pokuase Interchange’, among others, were a big plus for the Daily Graphic, for which reason the management of the GCGL and Mr Asmah needed to be commended.

Mr Monney expressed the hope that with the enrichment of the content of the paper, the GCGL, through its flagship newspaper, would continue to dominate the media landscape for many years to come.

Mr Sarpong also said the Daily Graphic was doing “many big and positive things” which were commendable.

He equally observed that setting the agenda on the media landscape required that the media go out for compelling stories, instead of scheduled events.

Mr Boadu-Ayeboafoh, for his part, said the GCGL should sustain the initiatives that had kept it growing.

He said notwithstanding the COVID-19 difficulties, “you have managed quite well; you have the endurance and that is the way to survive”.

The former Editor of the Daily Graphic also challenged the board and the management to ensure that the courier service, Graphic Courier, survived and added to the company’s stream of income.

“Seventy years from now, we still want to have the Daily Graphic available, and for this reason deepening its digital presence is very important,” he added.

He said although single copy sales were dwindling, “let’s not lose confidence; let’s face the challenge and show that we are confident of the future”.

Reacting to concerns raised by the Legal Manager of the GCGL, Mr Stephen Sah, about the manner in which some radio stations read newspapers on air, a development which was having a negative impact on newspaper sales in the country, the NMC Chairman said a series of meetings had been held in the past to resolve the issue.

He intimated that the NMC would further look into the matter and consider whether there was a possibility of coming up with some form of guidelines or not.

Mr Boadu-Ayeboafoh said while those efforts were being made to resolve the matter, the NMC observed that there were some members of the Private Newspaper Publishers Association of Ghana (PRINPAG) who were not in agreement with steps to stop the radio stations from reading the newspapers on air.

He said during the deliberations, the radio stations also argued that they were performing what they described as public education.

The Managing Director of the GCGL, Mr Ato Afful, said the group was better placed to grow stronger with the current measures it had introduced into its operations.

He said the measures included blocking revenue leakages, publishing compelling news content that hinged on truth and accuracy and transitioning into the digital space.

He, however, pointed out that cash flow continued to hurt the business, since the press ran on an index which was foreign exchange based, while sometimes finding spare parts was also difficult.

Nonetheless, the group was soldiering on and making sure that the press was in good use, he added.

“We urge the government and its agencies to endeavour to pay for what they consume from the group, so that it can stay afloat,” Mr Afful said.

That concern has been articulated multiple times by Mr Boadu-Ayeboafoh at various fora, the last being the Graphic@70th anniversary dinner, where President Nana Addo Dankwa Akufo-Addo was the special guest.

The meeting with the GCGL, which was at the instance of the NMC, was also to afford the NMC the opportunity of a face-to-face meeting with the board and the management in order to get first-hand information on the company's activities before a report on the state of the GCGL was later sent by the board to the NMC.