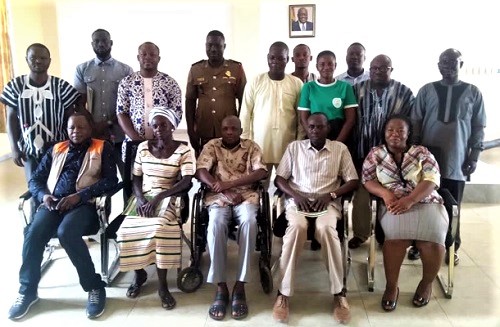 The meeting, held in collaboration with the Forum for Natural Regeneration (FONAR), formed part of a project dubbed “Scaling up Farmer Managed Natural Regeneration”, which is a low-cost land restoration technique used to combat poverty and hunger among poor subsistence farmers by increasing food and timber availability, as well as building resilience to climate extremes.

It was attended by heads of the various decentralised departments of state bodies with the objective of equipping them with the required knowledge of the project and its success story in the Talensi District.

After 10 years of implementation of the project in the Talensi District, WVI demonstrated the potential of reviving and using traditional, practical and cost-effective land restoration techniques to reverse land degradation in the region.

The project has since been recognised in the national re-greening policy strategy mix.

The project was first piloted in nine communities, but was later scaled up to benefit 52 communities in the Talensi District.

At the forum, the Farmer Managed Natural Regeneration Project Coordinator of WVG, Samuel Abasiba, noted that the implementation of the project had been of immense benefit to the people, stressing that it had resulted in the re-greening of large hectares of land previously degraded in the beneficiary communities.

He said “as a result of the success story in the Talensi District, we thought it wise to engage key stakeholders in the Bolgatanga East District to sensitise them about the project for them to take advantage of it to restore degraded lands”.

He urged the participants to consider adopting the project, saying “it is important for all stakeholders to ensure that the natural environment is protected for the benefit of unborn generations”.

The Executive Director of FONAR, Sumaila Saaka, urged the government to embrace the project in the quest to achieve the objectives of the Green Ghana project.

He said “due to the weather condition in northern Ghana, it won’t be proper for the government to spend huge sums of money planting trees annually since many of them may not survive due to long months of draught.

The Chief Executive of Bolgatanga East District, David Akolgo Amoah, lauded WVG and the project for the engagement, saying it would restore many degraded lands in the district.

“As a district, we will take full advantage of the project and implement it to reap its benefit," he said.