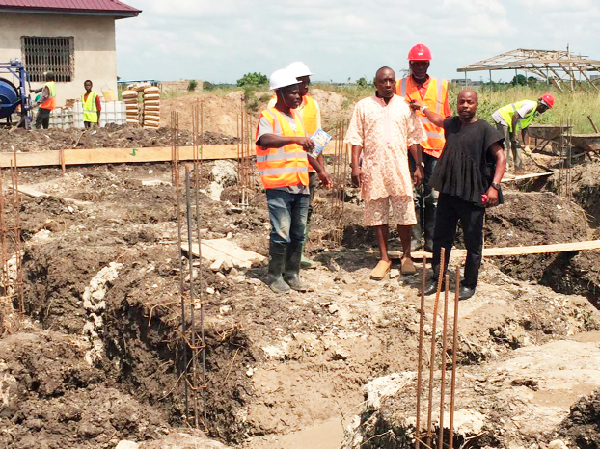 The chiefs and people of Nanglayoo, a fast growing community in the Dawhenya-Prampram area in the Greater Accra Region, are constructing a police station for GH¢650,000 to improve security in the town.

The community has targeted to use six months to complete the project.

During an inspection of the project last Thursday, an opinion leader of the community and a key figure behind the project, Torgbui Mawuli Gawu Dzidzienyo I, said security, safety and protection constituted major prerequisites for the development of every community, hence the decision by the chiefs and people to make contributions towards the project.

Torgbui Dzidzienyo, who is also head of the Ewe community of Nanglayoo, expressed satisfaction at the pace of work.

Accompanied by the Asafoatse of Nanglayoo, Mr Annang Dapoh, the opinion leader expressed gratitude to the Paramount Chief of the Prampram Traditional Area, Nene Tetteh Wakah III, and other chiefs and elders for their unflinching support for the project.

Torgbui Dzidzienyo said aside from the demand for basic amenities such as schools, hospitals, lorry stations and markets, improved security presence was paramount in advancing the development of the community.

He, therefore, appealed to all and sundry to help make the police station dream a reality.

Torgbui Dzidzienyo acknowledged the efforts of some individuals and entities who honoured their pledges in various ways.

Among them was the Prampram Traditional Council, which donated GH¢5,000, 10,000 pieces of six inches blocks and a promise to roof the building when completed; Hugo of Lovely Transport which donated 100 bags of cement; the District and Divisional Police Commanders who donated bags of cement and blocks; and stones from T.T. Quarry.

The works foreman, Mr Amos Takpah, assured the chiefs and people of Nanglayoo that the project would be completed on schedule.