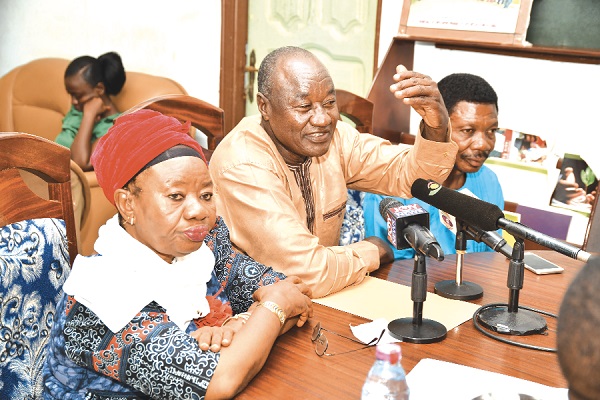 The Peasant Farmers Association of Ghana (PFAG) has called on the government to name, shame and prosecute smugglers of fertiliser under the Planting for Food and Jobs programme.

The association is of the view that smuggling still persists because there was no stiffer punishment for those involved in the smuggling of the product.

It alleged that while its members could not get the fertiliser from the suppliers, tonnes of fertiliser were smuggled across the borders to neighbouring countries.

At a press conference in Accra last Tuesday, titled, “Fertiliser smugglers must be punished to deter others and safeguard the taxpayer’s money,” the National President of the Association, Mr Abdul-Rahman Mohammed, also called on the Special Prosecutor’s Officer to investigate all smuggling cases and bring the culprits to book.

Mr Mohammed alleged that so far 99,400 bags of subsidised fertiliser (estimated at GH¢7.4 million) had been impounded from the smugglers this year alone.

He said the figure could be even far more because “the reported cases are those put in the public domain, but majority of smallholder farmers, especially in the northern parts of the country, are still struggling to access subsidised fertiliser in 2019.”

Mr Mohammed, who was supported by all the regional representatives of the association, expressed worry that contrary to claims by fertiliser dealers of the unavailability of subsidised fertiliser for the peasant farmers across the northern part of the country in the month of July and August, “large quantities of this same fertiliser are available for smugglers.”

He said many of the peasant farmers in the northern part of the country were not benefiting from the subsidised fertiliser and now had no choice but to rely on the open market fertiliser, which was too expensive and not sustainable.

“It is for this reason that we the members of the Peasant Farmers Association of Ghana (representing the voices of majority of smallholder farmers in Ghana) wish to make known to all of you and the Ghanaian public the magnitude of the smuggling for you to assist to bring this unacceptable illegality to an end,” Mr Mohammed explained.

While thanking President Nana Addo Dankwa Akufo-Addo and supporting his call for stringent measures from the security agencies against his saboteurs, as he stated during his recent visit to the Upper East Region, “the PFAG also challenges His Excellency not to only associate the smuggling to outsiders but to also look within.”

He catalogued a number of reports by the media on the smuggling of fertiliser outside the country some as far as to Cameroun, adding that the saddest part was that there had been little or no information on how the culprits were dealt with according to the law.

Threat to Ghana Beyond Aid

“While the PFAG appreciates the efforts of security agencies to prevent some of the subsidised fertiliser purchased with the Ghanaian taxpayer’s money from entering neighbouring countries, we are highly disappointed with the failure of all the measures put in place by the government to ensure that farmers get their full benefit from the fertiliser subsidy programme.

“The smuggling of fertiliser has negative implications on His Excellency’s quest to develop Ghana Beyond Aid, ensure food security in Ghana as well as contribute to the success of the sustainable development goals, especially goal one which focuses on ending poverty in all its forms everywhere,” Mr Mohammed said.

“Armed robbers only attack individuals or groups but the impact of fertiliser smuggling is widespread as it affects food security which affects incomes, health and the general livelihood and yet any single case of robbery is publicised for all of us to see them.

“We also want to see those smuggling the fertiliser being punished for every Ghanaian to know them. Ladies and gentlemen, the smuggling must end now,” Mr Mohammed declared.