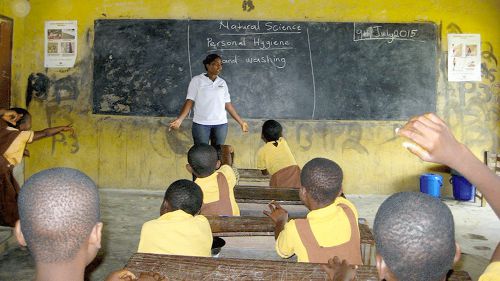 The National Association of Graduate Teachers (NAGRAT) and the Coalition of Concerned Teachers-Ghana (CCT-GH) have called on the government to immediately sit with the leadership of the various worker unions to work towards increasing salaries to commensurate with the upsurge of prices of goods and services in the economy.

Speaking at a press conference in Accra, the President of the NAGRAT, Mr Eric Angel Carbonu said the incessant and interminable increase in the price of fuel had pushed the cost of transportation for both private and commercial upwards, adding that “last year by this time, a bag of cement was GH¢40.00, but today, a bag of cement is GH¢52.00, GH¢12.00 more”

The escalation of prices for food items on the local market, he added, was evident for all to see, saying that “the cost of rent and accommodation are on the rise and have become a huge burden to the Ghanaian worker, yet we don’t have any comprehensive housing scheme to support the low-income level of workers in this country”.

“Unfortunately, while we are experiencing huge percentage increases in the price of goods, there is no commensurate upward adjustment in the incomes and emoluments of the Ghanaian worker. In fact, the four per cent and the seven per cent salary adjustment for 2021 and 2022 respectively had been a drop in the pan in the light of the current economic realities.

“The real value of the income of the worker has depreciated tremendously,” he said, adding that, “the engagement that should be taking place today between the Ghanaian worker and the government should be an engagement to recognise the challenges and come up with practical steps to cushion the worker from these price escalations.”

He said there was the need for the government to critically and dispassionately look at its expenditure, adding that “the worker cannot guarantee a peaceful labour environment when his or her salary cannot take him home”.

Worker agitation, Mr Carbonu said, could not end when the worker was the first victim of the current economic situation and that, “the answer to our challenges is finding immediate answers to the hard-hitting economic situation.

“We call on all labour unions to quickly call for the convening of a new salary negotiating team to come out with new and realistic salary levels to be commensurate with the current economic realities,” he stated.

He added that the unions would begin series of actions to knock at the doors of the government to ensure that the situation was improved.

At the same event, the four teacher unions, the Ghana National Association of Teachers (GNAT), NAGRAT, CCT-GH and the Teacher and Educational Workers union (TEWU), have called on the government to institute a cost of living allowance (COLA) for teachers and all public sector workers.

On behalf of the unions, the President of CCT-GH, Mr King Awudu Ali, said “the teacher unions recognise the economic challenges facing our members like all other public sector workers.”