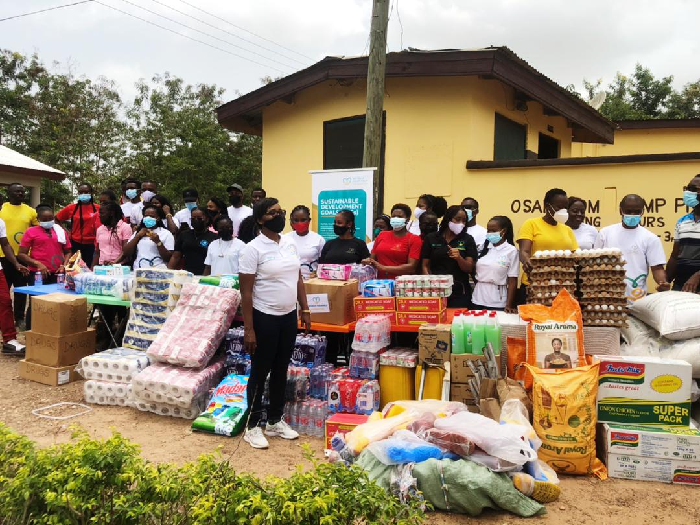 Part of the goodies “Myhelp-Yourhelp Foundation” donated to the Osamkrom Camp Prison at Agona Swedru on Easter Saturday to celebrate the Easter with inmates.
30.5k Shares

It was all joy when “Myhelp-Yourhelp Foundation”, a non-governmental organisation on Easter Saturday visited the Osamkrom Camp Prison at Agona Swedru in the Central Region to celebrate the Easter with inmates.

Buses carrying executives and members of the Foundation arrived at the Camp at about 10am, followed by trucks loaded with assorted products to be donated to the camp.

The members and their executives, dressed in their branded polo shirts of different colours, were in high spirits. Alighting from the buses, they all gathered to thank God for a successful journey from Accra to the Camp.

The team was welcomed to the Camp by senior officers, and after a few pleasantries, the members were briefed about the protocols at the Camp.

Having gone through the search process, the team was allowed into the Camp’s main yard where they, together with the inmates, held a church service. Prophet Asante Obeng of the Foundation who delivered the sermon which bordered on hope, encouraged the inmates not to give up on life but to trust God and to hope for a brighter future.

Using his personal life as an example, Prophet Obeng said he was on the verge of death when God miraculously saved his life—assuring the inmates that God was capable of saving anyone who genuinely sought Him.

After the sermon all the inmates were handed Bibles and Christian literature authored by Bishop Dag Heward Mills of the Lighthouse Chapel, titled, “How to Be Born Again and Avoid Hell”.

The Founder of the Foundation, Mr Nicholas Cofie in brief remarks, said Easter is about giving and sacrificing and that when Christ was on earth, he cared for all, including prisoners.

Quoting the scriptures in Hebrews 13:3, he said, remembering the needy, particularly those in prisons was in fulfillment of Christ’s teachings about giving and that the Foundation would continue to provide for the needy in society.

For him, the gesture also forms part of activities to mark the third anniversary of the Foundation, noting that since its inception, it has embarked on similar exercises on many occasions at different places.

Explaining why the Foundation chose Osamkrom Camp, Mr Cofie said one of its members, Mr. Ray Dadze-Yorke, in 2017 passed by the Camp and saw its dejected state.

He added that Mr Dadze-Yorke reported the situation to the leadership of the Foundation, following which a team was dispatched to the camp to conduct a needs assessment of the facility.

He said when the needs assessment was finished in January 2021, it came to light that the Camp needed many things, including drugs, a corn-mill, farm machineries, and water storage systems.

“We were able to raise the needed funds to buy a new corn-mill worth GH¢6,000 for them,” Mr Cofie noted, adding that they also procured some assorted drugs worth over GH¢8,000 to stock the infirmary of the Camp.

“A little of my help, a little of your help, can help the poor and the needy,” he noted, pointing out that seeing the inmates smile and also sharing the word of God with them brings joy to all the members of the Foundation.

Items donated by the Foundation included bags of gari, bags of beans, bags of Royal Aroma Rice, 400 pieces of branded face masks, two Veronica buckets, a bag of sugar (50 KG), cartons of milk, boxes of Indomie, 25 litres of oil, 60 cartons of water, soft drinks for everyone, 300 pieces of packed food for the inmates, packs of Toilet-Rolls and two big sacks of detergents.

The rest were 200 pieces of tooth brush, a box of toothbrush, boxes of Pepsodent paste, cartons of Dettol, boxes of Savon medical soap, and beverages.

The In-Charge of the Camp, Assistant Director of Prisons (ADP) Justice Essumang, commended the Foundation for the gesture, noting that the gesture would go a long way to improve the wellbeing of the inmates.

He said the Camp was established to help decongest some of the major prisons in the country, and added that the Camp was very useful to the Ghana Prisons Service since it produces a lot of maize to feed other prisons, aside from itself.

He said the Camp has been producing maize to feed inmates at both Winneba and Ankaful Maximum prisons, appealing to benevolent organisations and individuals to help the Camp with farm machinery such as tractors.

ADP Essumang said the only tractor of the Camp had broken down, hence impacting gravely on the farm works of the Camp.

Having expressed their appreciation for the gesture, some of the inmates also appealed to the Foundation and benevolent individuals to help the Camp with some computers to help their studies.

They equally appealed for water tanks since the only Polytank at the Camp could not hold enough water to go round the inmates, particularly when the taps are not flowing.