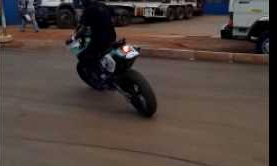 A barber who together with an accomplice attacked a teacher with a machete and attempted to rob him of his motorbike has been jailed 24 years by the Keta Circuit Court presided over by Mr Kwame Polley.

The convict, Ababio Ezeze, and his accomplice, at large, reportedly inflicted wounds on the teacher in their bid to snatch the bike from him but luck eluded Ezeze when they tried to escape because he was caught by people who rushed to the scene to rescue the complainant.

The facts of the case as presented to the court by the prosecutor, Chief Inspector Seth Appau, was that the complainant, Abuya Etsey, uses his Sanya motorbike with registration number M-VR-4254-18 for commercial purposes, known as okada, in Aflao.

They then pleaded with Etsey to convey them to the said place which he agreed to, but on reaching a place called Zuime village near an old Muslim cemetery, Ezeze and his accomplice ordered the complainant to stop.

Ezeze, according to the prosecution, pushed the complainant off the motorbike and pulled a machete from his shirt and inflicted  wounds on Etsey’s right wrist, left knee and buttocks with the machete.

Etsey subsequently fell and they took the motorbike and sped off.

The prosecutor said Etsey raised an alarm, chased the two and used his helmet to hit the back of Ezeze’s head, making him fall from the bike.

Upon realising that people were rushing to the scene, the two reportedly took to their heels but Ezeze was grabbed and handed over to the police.

Ezeze in his caution statement to the police reportedly denied the offence. On September 9, he was put before the Keta Circuit Court where he pleaded not guilty but was found culpable of the offences after the full trial, leading to his incarceration.