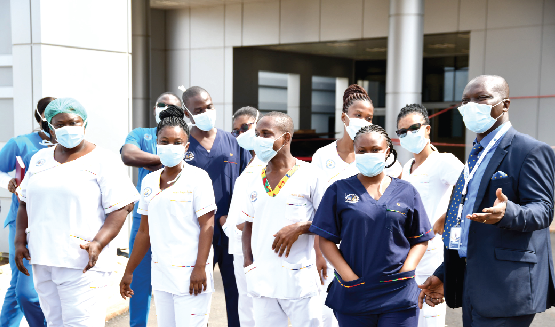 Some 60,398 health workers in the Greater Accra, Ashanti and Central regions had been vaccinated against the COVID-19 as of last Thursday, March 11, 2021.

They comprised those in both public and private health institutions.

In all, there are 66,686 health workers in the three regions.

The President of the Ghana Registered Nurses and Midwives Association (GRNMA), Mrs. Perpetual Ofori-Ampofo, gave the figures at a virtual World Health Organisation (WHO) Africa Media briefing on the roll out of the COVID-19 vaccine and the impact of the virus on health workers in Africa.

Mrs. Ofori-Ampofo said the next phase of the vaccine roll out to cover 76,078 health workers in the rest of the 13 regions would take off today.

She urged the workers to take advantage of the opportunity and get vaccinated against the virus, reminding them that “we are not immune to the virus”.


According to her, health workers all over the world had not been spared the pandemic, and that as of January 2021, some 789 of them had been infected by the virus, with six deaths.

“It is about time African countries understood we could no longer sit back when it comes to vaccine development, including some medication and logistics that we need in the health sector.

“It is about time we developed the infrastructure and the personnel to handle some of these things, so that the huge money that is pumped into vaccine importation annually can be channelled into local research and vaccine and medicine development for us to have whatever we need at any time,” she added.

Mrs. Ofosu-Ampofo also appealed to governments around the world to impress on the World Trade Organisation to waive the patency right on vaccines to make the technology available to countries with reputable pharmaceutical companies to also produce them.

“If we continue with the way we are going now, certain countries will have to wait for a year or more before receiving the vaccine,” she said.

She called on African countries to invest more in health workers, especially nurses and midwives, to facilitate the realisation of universal health coverage by 2030.

The WHO Regional Director for Africa, Dr Matshidiso Moeti, said it was expected that COVID-19 would infect over four million Africans, with about 106,000 deaths.

According to her, sub-Saharan Africa and Algeria had more than 100,000 health workers, which meant that 11 people contracted the virus every hour, accounting for 3.5 per cent of all confirmed cases in the region.

She said the situation was high in Guinea Bissau, Liberia and Algeria, where over 10 per cent of confirmed cases were health workers.

Dr. Moeti said when health workers were sick, communities were affected, “so we must do well to protect them, including the implementation of preventive measures against COVID-19, as well as ensure the continuous supply of PPE”.

She further said available data in Africa indicated that more than a third of COVID-19-related deaths involved people above 65 years.

Dr. Moeti described as “great news” the fact that about 14.8 million doses of vaccines had so far been delivered to 22 African countries.

The director, however, expressed concern that 19 African countries had not yet started the vaccination campaign.

She commended healthcare workers for their leadership, dedication and sacrifice in helping to combat the spread of the virus.