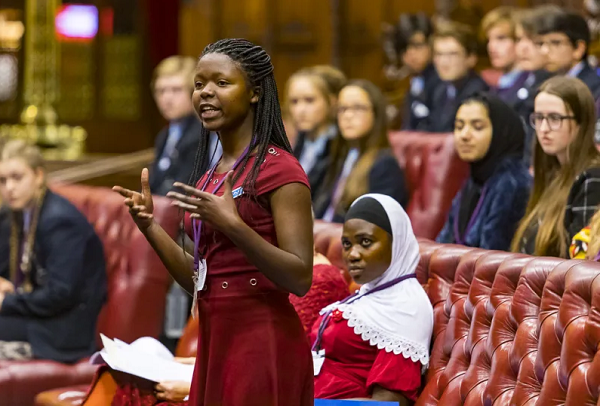 File photo: "we believe that a better world comes from giving better opportunities to women and girls" - Joseline speaks out about girls' rights in Rwanda at the House of Lords. DFID, Flickr
30.5k Shares

A study conducted by Right to Play Ghana has revealed that girls are now developing leadership skills and consequently taking up positions in schools because of the opportunities teachers are giving them.

“So, we now have schools with girls as the school prefects. Hitherto, this was not the case but now we are seeing this happening in our classrooms,” it said.

The Education Specialist of Right to Play Ghana, Kwabena Gao, who disclosed this at a training programme on play-based learning organised for journalists and public relations officers in Accra and Ho said, both boys and girls had their capabilities and capacities and once teachers were able to realise and harness them, both genders were able to come out with the potential that they had.

He said in order to raise boys and girls who would be ready to compete in the global world, there was the need for the country’s education system to look at how it could empower all children.

Touching on the implication for more girls developing leadership skills, Mr Gao said it would help the country to, in the future, have more women in leadership positions who would also serve as role models to other girls.


He said when girls were educated and empowered they were able to grow up to support and contribute towards the socio-economic development of the country as well as determine the appropriate time to go into relationships.

Following the revision of the curriculum in 2019, some creative pedagogies, including play-based learning, were introduced to teaching and learning and to help journalists and PROs to understand this approach to learning; how it was done in the classroom and be able to capture them appropriately in their reportage that the workshop was organised.

He said in their teachings, teachers should choose games that took into consideration the cultural background of learners, their religion and ethnic group to make learning easier for children.

Giving further details of the study that was conducted in 2021, the Monitoring and Evaluation Specialist of Right to Play, Kwarteng Frimpong, said it was done in schools in the five districts in the three regions that Right to Play operated, namely Greater Accra, Volta and Northern regions.