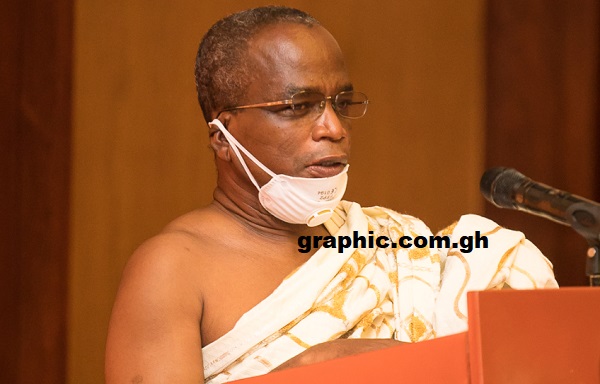 The National Media Commission (NMC) has described a directive by the Minister of Communication to the Ghana Broadcasting Corporation (GBC) and Crystal Television for the two entities to reduce their digital television channels on the national digital terrestrial television (DTT) platform as a move that undermines the 1992 Constitution.

In a statement signed by its Chairman, Mr Yaw Boadu-Ayeboafoh, the commission said the directive by the minister was a form of political control which hindered the two media houses from adequately serving their purpose as stipulated by the Constitution.

Also, it said the directive was a direct attack on the authority of the NMC, as stipulated under Article 167 of the 1992 Constitution.

“It is the view of the commission that any action by any entity which culminates in limiting or depriving the media of the use of public resources legitimately allocated to them undermines their capacity to serve the nation, as anticipated by the Constitution.

“The commission wishes to state clearly that the directive given to GBC and Crystal TV by the Minister for Communications purports to usurp the constitutional mandate and authority of the NMC and same cannot be obliged under our current constitutional dispensation,” it said.

The statement was released yesterday following an emergency meeting held by the NMC on a petition filed by the GBC against the directive by the Minister of Communications, Mrs Ursula Owusu-Ekuful.

GBC staff: We’ll resist attempts to reduce our channels from 6 to 3

The Ministry of Communications directed GBC to reduce its six operating digital television channels to three.

In a letter addressed to the Director-General of the GBC, dated June 26, 2020, Mrs Owusu-Ekuful had said the directive, which was to be implemented within 60 days, was to ensure that there was space on the national DTT platform, which is currently at full capacity with 40 operating channels.

Currently, the state broadcaster operates six of those 40 digital channels, namely, GTV Sports+ (a channel for sports), GBC 24 (a 24-hour news TV channel), GTV Life (a religion and culture channel), GTV Govern (a governance channel), Obonu TV (a channel for the people of Greater Accra) and Ghana Learning Television (a channel established for tutoring JHS and SHS students during the COVID-19 pandemic).

The letter indicated that GTV's channels would be returned when work on the planned expansion of Ghana's DTT network was completed.

"Kindly note that upon the planned future expansion of capacity on the network, which has been delayed due to the current pandemic and the uncertainties generated in global supply chains, you will be allocated additional channels," it said.

“Please take steps to implement this directive within sixty (60) days of receipt of this letter. We are counting on your cooperation in this regard," the letter added.

Commenting on the national DTT, the NMC explained that it was a platform for the transmission of broadcast content and, therefore, it should be treated as part of the media, in line with Article 162 of the 1992 Constitution, which guarantees freedom and independence of the media.

“It is uniquely positioned as the medium through which all free-to-air broadcast content can be transmitted to reach the Ghanaian public. Accordingly, it sits at the gateway of public communications with the capacity to determine whose ideas get communicated within the public sphere.

The NMC also said GBC was a state-owned media organisation which must be “insulated” from any form of governmental control, as stipulated under Article 167 (c) of the 1992 Constitution.