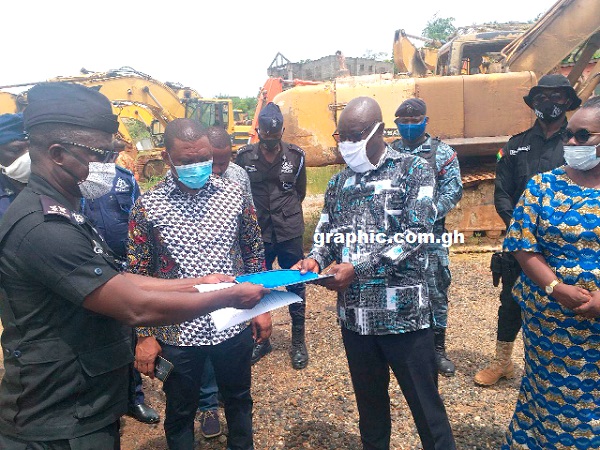 The Minister of Lands and Natural Resources, Mr Kwaku Asomah-Cheremeh, has directed the Operation Vanguard team to hand over immediately any equipment it seized from illegal miners to the Lands Minister, as required by law.

He has also urged the team not to succumb to any form of pressure from so-called higher authorities to release any seized equipment to them.

"Section 99 of the Minerals and Mining Act, 2006 (Act 703) states that all seized equipment from illegal miners must be kept in the custody of the Minister in charge of Mines.

“The President appointed a minister to be in charge of Lands and Natural Resources and his office is at the Lands Ministry. No other person has the mandate to take custody of any equipment," he stressed.

The minister gave the directive when he paid a working visit to the Forward Operation Base (FOB), Western Command of Operation Vanguard in Tarkwa in the Western Region yesterday.

The visit formed part of a nationwide exercise being undertaken by the Lands Ministry to take inventory of all equipment that has been seized from illegal miners.

In the minister's entourage were the Deputy Minister of Lands and Natural Resources in charge of Mines, Naana Eyiah; the Administrator of the Minerals Development Fund (MDF), Dr Norris Hammer, and some top officials of the ministry.

The addition of nine more excavators brings to 168 the number of excavators that have so far been taken over by the Lands Ministry.

The list of seized items presented to the minister covered 71 items.

Speaking to the Daily Graphic during the tour, Mr Asomah-Cheremeh said he would continue working visits to mining areas to recover all seized equipment.

"So far, we have taken inventory of 138 excavators on Adenta Aviation land; 21 in Obuasi, including 13 vehicles; and now we have nine in Tarkwa. We will continue to take inventory of all equipment as the law requires of us," he said.

He urged the police-only Operation Vanguard team to live above reproach and stay committed to the national assignment of clamping down illegal mining.

"There have been a series of allegations against you and it is not good for the galamsey fight. Many people have laid down their lives for this country and so I urge you too to act in the interest of Ghana by being honest in the mandate given to you by the state,” he said.

Supt Kumah said the team was committed to doing all within its means to fight the galamsey menace.

"Our task is to seize all illegal mining equipment found at illegal mining sites and evacuate same to the nearest police station, destroy illegal mining camps, arrest illegal miners and arraign them for prosecution, as appropriate; and we are committed to doing this,” he said.

However, he said, some challenges, including the lack of assault boats for patrols, night vision devices and special uniforms for the conduct of its operations needed to be resolved to make the work efficient.

Supt Kumah also said interference by persons in higher authority remained a huge challenge in the fight against the menace.

For his part, the Western Regional Minister, Mr Kwabena Okyere Darko-Mensah, urged the Operation Vanguard members to leave a positive legacy in the galamsey fight.

"Some of your colleagues who were sent here to fight galamsey left a bad name behind but we want you to leave positive reports behind, so that we can all celebrate you for helping to tackle a national development challenge," he said.