Minerals Commission to roll out scheme on sustainable mining 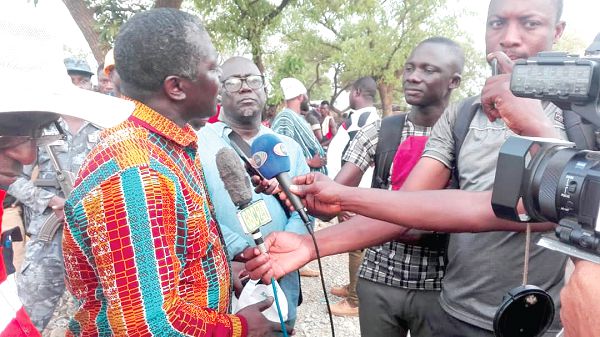 Mr Benito Owusu-Bio (left) explaining issues to journalists at Gbane during the closure of illegal mining pits in the area. With him is Mr Kwaku Antwi-Bosiako (right).

The Chief Executive Officer (CEO) of the Minerals Commission, Mr Kwaku Antwi-Boasiako, has said the commission will roll out community-based mining programmes this year to ensure sustainable small-scale mining in the country.

According to him, the move was part of the government's efforts to build the capacity of people at the grass roots on sustainable mining to help eliminate illegal mining activities from the country.

Consequently, he said, the commission had started engaging with key stakeholders at the metropolitan, municipal and district and community levels to help implement the programme.

"We want to make sure that mining is done in a legal way, so that lives and livelihoods will not be affected. So we want to get traditional rulers, leaders of notable illegal mining groups and other opinion leaders to support the initiative to deal with the negative impact of illegal mining activities on communities," he said.

Mr Antwi-Boasiako said this when a team from the Ministry of Lands and Natural Resources and the Minerals Commission visited Gbane, a mining community in the Talensi District in the Upper East Region, to close down some illegal mining pits in the area.

He said the commission was taking steps to fully decentralise its operations by setting up more offices (mining districts) to monitor mining activities at the community level.

He added that his outfit would also strengthen its collaboration with the security agencies, especially the police, to increase their presence in the mining communities to help stem the tide on ‘galamsey’ activities.

The illegal mining pits, said to be owned by some individuals and groups, had been at the centre of explosions at the Pubortaaba and Yenyeya mining concessions that claimed some 16 lives in January this year.

The illegal mining groups were said to have encroached on the concessions of the Pubortaaba and Yenyeya mining companies.

Acting on the ruling of a High Court, the Deputy Minister of Lands and Natural Resources in charge of Forestry, Mr Benito Owusu-Bio, led the team to Gbane last Wednesday to seal those illegal pits.

"We will soon organise illegal miners into community mining schemes, so that they can be regularised to mine sustainably. For now, we are focused on saving the lives that are being lost and also mitigating the health impact of illegal mining methods on people," he added.