Mepe citizens use festival to mobilise funds for devt 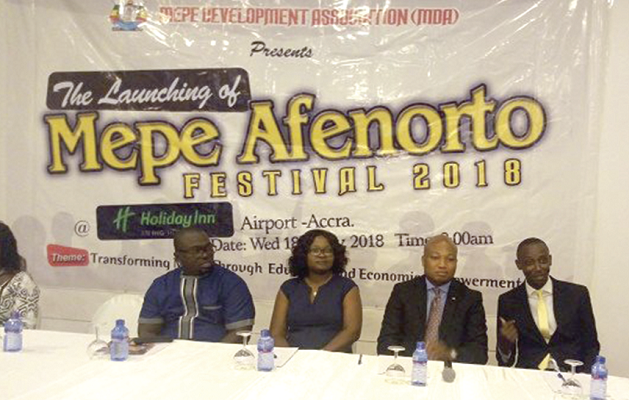 The chiefs and people of the Mepe Traditional Area in the Volta Region have launched the 64th edition of the annual Afenorto festival, with a commitment to mobilise resources to fund development projects in the area.

Afenorto, meaning ‘period of rest at home’, is a celebration by the people of Mepe, usually between the months of July and August every year.

It is aimed at renewing the sense of oneness among the people. It also provides unique opportunities for reunions, and bonding with families and the remembrance of ancestors.

This year’s edition is on the theme: “A People United towards a Culture for the Future through Education: Benefactors, Beneficiaries and Practitioners.”

Activities lined up for the celebration include an inter-school gala competition, a cultural musical fair,a lighting procession, a clean-up exercise, a vigil at all hunting shrines in the community and a film show.

There will also be a grand durbar of chiefs and people of the Mepe Traditional Area on August 4, this year, a state harvest, and health walk, an inter-clan regatta or canoe racing, health screening, a send-off party and beach jams, among others.

The festival will climax on Sunday, August 12, this year, with an inter-denominational thanksgiving church service.

Speaking at the launch of the event in Accra, the chairman of the Mepe Development Association, the body responsible for planning the festival, Mr Kojo Elenu Fabian, said this year’s festival would be used to encourage the people “to develop our human resource base which is the foundation of our vision and mission towards the growth and development of the Mepe Traditional Area.”

The Managing Director of School Excess Ghana Limited, Mr Emmanuel Kojo Arhin, who chaired the occasion, called on all citizens of Mepe, home and abroad, to get involved in all the programmes lined up for the celebrations.

He also called on the youth from the Mepe area to be disciplined and focus on their education and other skills training for a better future.

The Member of Parliament (MP) for North Tongu, Samuel Okudzeto Ablakwa, who was at the launch, commended the executives of the development association for their efforts to keep the festival alive.

He expressed the hope that the festival would be a rallying point for the professionals from the Mepe Traditional Area to offer their expertise towards the development of the area.

Mr Ablakwa, therefore, called on individuals, corporate institutions and organisations to take advantage of the festival to support the development of the area.

In 1874, General Sir Garnet Wolseley moved against the armies of the Ashanti Kingdom who were attacking the coastal tribes of the Gold Coast.

Frightened by the magnitude of their forces, the Anlos were said to have chosen to align with the Ashantis, but the soldiers of Mepe fought alongside the British colonial army for the freedom of the people of the coastline, an alliance that won most of the battles which became known as the “Sagrenti War” (i.e. Sir Garnet War).

Mepe celebrated its battle victories by dancing to tunes of “Agbekor” war drums. This became an established tradition, with their forefathers setting a day aside (at the end of July) for the annual commemorations, which eventually became known as “Agbekortu”.