Canadian diplomats felt the need to justify spending hundreds of thousands of dollars on a campaign aimed at reining in outdoor defecation in Ghana amid questions over the use of development money, internal documents reveal

public health sanitation project included a large, graphic billboard showing people squatting on a beach with the slogan, “Beaches are not toilets — Don’t do it here.” A government of Canada mark is strategically placed at the bottom alongside the logos of the Ghanaian government and of the UN aid program, UNICEF.

Documents obtained under access to information laws show the Canadian end of the file went quiet after the project launch in Ghana last fall until when a photograph of the billboard began circulating on social media.

“Canada is paying for signs in Ghana that tell people to s–t on the beach,” a user by the handle of Karoumi tweeted in late May along with a photograph of the poster. “This is not a good use of our tax dollars.”

The negative comments, including the tweet, caught the eye of Canadian officials in the Ghanaian capital of Accra, the partially redacted documents show. They worried to what extent the criticism might gather steam, particularly because top opposition Conservatives had been tagged in the tweet, and whether to prepare the minister in case questions arose in Ottawa.

In a late May email sent in response to the concerns to an unidentified UNICEF contact, the first secretary of the High Commission of Canada in Ghana asked for information about the campaign. The email specifically references the billboards, which aimed to “create ‘shame’ for people to desist from the practice,” the official said.

“The photographs have attracted a huge public concern — both in Ghana and Canada,” wrote Eric Chimsi, a Canadian development officer with the high commission. “For us to properly address these concerns on our platform, we would like to know which entity or person within (the government of Ghana) approved this methodology and use of the images for the publicity materials.”

An unidentified UNICEF official quickly responded that the sanitation campaign spearheaded by the Ghanaian government and launched by the president in November was the result of a national development priority to eliminate open defecation. “Creative agencies” developed the imagery, the UNICEF official said. 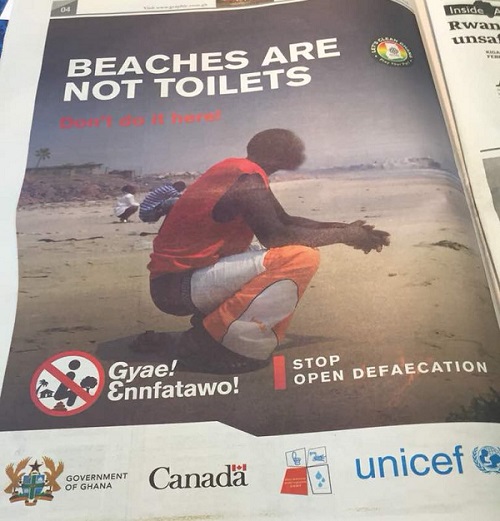 Canada’s financial contribution — about $850,000 — made possible the campaign to address one of Ghana’s most “significant” development challenges, the official said, adding the money had been instrumental in getting Ghanaians to change habits and build proper toilets.

The commission’s first secretary, Francis Bedros, forwarded the UNICEF response to Ottawa under the subject heading “Twitter storm — Canada wordmark on ‘Stop Open Defecation’ billboards in Ghana.” The information was circulated to senior Global Affairs officials, who decided against any immediate public response, but urged further preparation of background materials in case “the tweets get taken up by media/opposition.”

Ironically, perhaps, Canada’s effort found solid support from Conservative MP and immigration critic Michelle Rempel, an otherwise thorn in the Liberal government’s side. In response to Karoumi’s tweet, Rempel sent a tweet of her own:

“Nearly 1B people have to defecate in the open. Education on basic sanitary practices and access to sanitation facilities is one of the best ways to prevent of disease and, as such, is important in considering spending on development,” Rempel tweeted May 27. “(Poop) matters,” she wrote, using a relevant emoji.

The documents show Canada has been working with UNICEF since 2012 to end open defecation in Ghana. At the launch of the new campaign in northern Ghana in November, Bedros gave a speech to the gathering of dignitaries in which he noted that Ghana had a “very high rate” of open defecation for lower-middle income countries.

Bedros further cited “clear links” between the practice and poor health and socio-economics. Poor sanitation, he said, can result in a higher incidence of lethal among children and stunted development.

“As long as people continue to defecate in the open, everyone is at risk of disease,” Bedros told the group, according to his speaking notes. “We must continue to convince households and communities of the importance of investing in the construction and maintenance of toilets for so that everyone has an alternative to open defecation.”