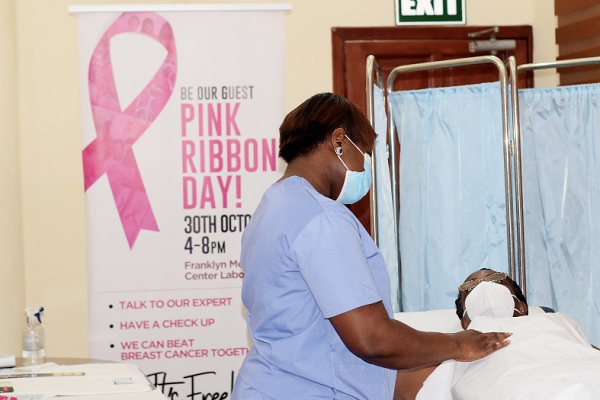 With the increasing trend of breast cancer across the world, the Clinical Services Manager of the Franklin Medical Centre, Dr Mawusi Kemetse, has called on men to patronise breast screening exercises as cancer could be more dangerous in men than women.

According to her, the myth created over the years had left a lot of men ignorant about the breast cancer disease, and had, therefore, created more threat in men as a lot of them could live with the disease without having any knowledge about it.

She further advised people to adhere to healthy lifestyles by way of eating balanced meals and go for routine medical examinations.

“There is the need for society to do away with the myths surrounding breast cancer, including being for only females since the disease is no respecter of persons, and always seek medical attention,” she said.

Dr Kemetse made the appeal to men when The Mirror, Ghana’s most popular and biggest selling weekly, partnered Franklin Medical Centre, a wellness centre, to organise a free breast screening and education for staff of the Graphic Communications Group Limited (GCGL) in Accra.

Awareness
The exercise forms part of GCGL’s activities to mark this year’s Breast Cancer Awareness Month, which is celebrated every October.

Besides the screening, the staff were also educated on breast cancer, its signs and symptoms and treatment.

As part of the company’s Corporate Social Responsibility (CSR) programme, there will be a similar exercise for residents of Adabraka and its environs on, October 31, 2020.

Early detection
Dr Kemetse reiterated that breast cancer could be treated when detected early, noting that a lot of times, people reported to health facilities late.

“When breast cancer is detected early, the lump can be taken out in order for it not to spread to other parts of the body such as the liver, brain etc,” she said.

When asked why there were recurrence after the lumps in the breast were removed, Dr Kemetse said it could be that there was wrong diagnosis and staging, emphasing that it was always advisable for people to report early to prevent any complications.

Dr Kemetse expressed appreciation for the collaboration with GCGL and called on all to take advantage.

The Director, Marketing and Sales at GCGL, Mr Franklin Sowa, said the campaign was part of the company’s CSR.

He added that it was also part of The Mirror’s role as the foremost family newspaper in the country that promoted health, family bonding and educated to ensure the wellbeing of the society.

Global statistics
Global statistics indicate that about 1.7 million women are diagnosed of breast cancer yearly with about 500,000, representing 28 per cent dying from the disease.

According to the World Health Organisation (WHO), the disease was believed to be high in low and middle income countries.

In Ghana, for instance, breast cancer has been identified as the second leading cause of cancer deaths in the country, with about 2,900 cases being diagnosed annually and at least one of eight women with the disease dying.

Additionally, nearly 70 per cent of women diagnosed with breast cancer in Ghana are in advanced stages of the disease due especially to low awareness, resulting in limited treatment success and high death rate.

Meanwhile, the Ministry of Health (MoH) has, for the first time, launched a national campaign to raise awareness of breast cancer earlier this week.

The initiative was to help coordinate and synchronise all the efforts stakeholders were making with various awareness programmes on breast cancer to give the campaign on the disease, a national character.