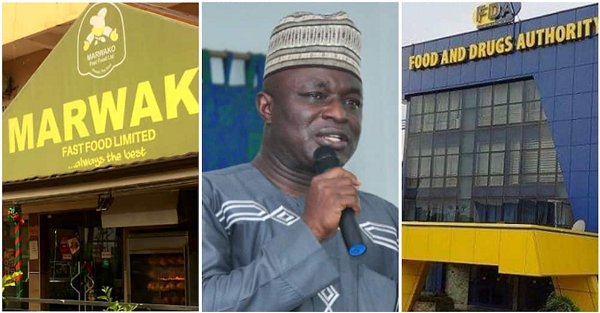 The Management of Marwako Fast Food says it has taken steps to pay a ¢750,000 fine handed it by the Food and Drugs Authority (FDA).

According to its Public Relations Officer of Marwako, Mohammed Amin Lamptey, his outfit had already paid ¢500,000 to the FDA and would pay the remaining fine later today.

The FDA in a statement on Monday (June 13, 2022) said the process to establish the root cause of the recent food contamination at Marwako Restaurant, East Legon branch was hampered "by the unapproved and unilateral decision of the management of Marwako to destroy some of the food items whilst the investigation was in progress."

However, Mr Lamptey in an interview with GraphicOnline said although his outfit had accepted the sanctions, it disagreed with suggestions that the management of the restaurant destroyed some food items during the investigation.

"We agree with the FDA but if you look at it from the perspective of crisis management and crisis communication, the things they put out there can easily damage our brand," he said.

"...Whatever they have said in their statement, we can't contest them but I have indicated that Marwako has every right to call for an independent investigation with regards to the investigation".

He said the company decided against an independent investigation because of the trauma its customers, management and staff had already been through.

He also disclosed that the affected restaurants were also being refurbished as part of a roadmap towards reopening.

Mr Lamptey said his outfit was implementing some FDA guidelines to streamline its operations and train its staff.

"Reopening is unpredictable because the FDA has asked us to train some staff and afterwards there will be another assessment," he said.