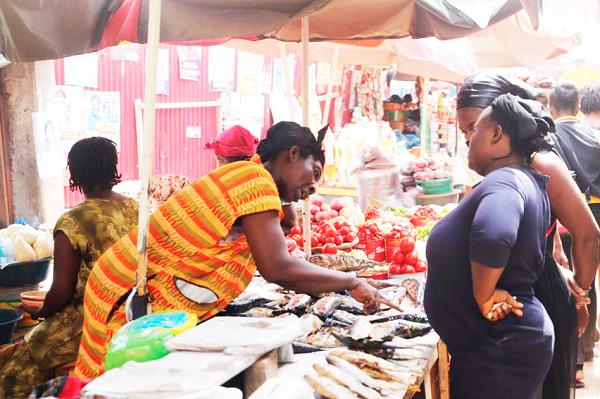 • A smoked fish seller attending to prospective buyers with no face mask on
30.5k Shares

In spite of the surge in COVID-19 cases in the country, there is total disregard for the safety protocols at the Asafo market in the Kumasi metropolis.

Both buyers and traders are seen going about their business without wearing face masks and the use of Veronica buckets for handwashing are also absent.

When the Daily Graphic visited the market last Friday, the traders, mostly women, downplayed the significance of the safety protocols on COVID-19 and even made mockery of the existence of the virus.

To some, it was a mere political ploy to frustrate the citizenry and to unnecessarily thwart their efforts to eke out a living.

Others were of the view that the daily purchase of face masks at GH¢ 1 was a drain on their pockets and suggested that the city authority provided the people with face masks free of charge.

A trader, who wants to remain anonymous, told the Daily Graphic that the persistent talks and write ups on adherence to the safety protocols on COVID-19 amounted to creating fear and panic among the populace, saying " the government must stop that."

Instead, she urged the Kumasi Metropolitan Assembly (KMA) to provide the people with face masks daily, "If it wants to stop the spread."

Meanwhile, the Chief Executive of the KMA, Mr Osei Assibey Antwi, has commenced the processes to introduce the shift system at markets in the city to ensure social distancing among traders, in particular, and buyers.

Last week, the KMA had the first of its engagement with traders at the Asafo market on the shift system. However, the date for commencement of the system was yet to be announced.

For now, the Asafo market remains a different "republic" with each one's future and survival in their own hands.

The story is indeed no different at other markets in Kumasi. The situation is similar in the central business district where traders and commuters have blatantly ignored the wearing of face masks.

To some, the wearing of face masks was a discomfort and made them find it difficult to breathe.

A driver’s mate said he was unable to call out for passengers when he had a face mask on hence his decision not to put one on.