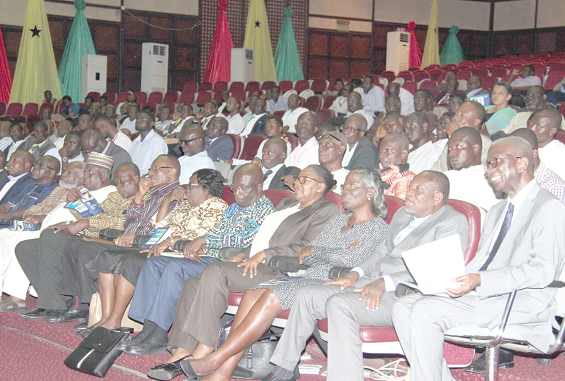 The Minister of Works and Housing, Mr Samuel Atta Akyea, has called for a stakeholders’ engagement on the construction of housing projects for government workers through a mortgage system that will leverage pension funds.

He explained that the pension fund, as a pool of resource backed by legislation, could see about 30 per cent of contributors’ funds invested in housing projects.

“In about 15 to 20 years, the one who didn’t have money to buy property at a go will be able to say that ‘I’m retiring and I have a two-bedroom house.’ And that for me is the definition of social security,” he said.

The theme for the lecture was: “Ghana’s construction industry, yesterday, today and tomorrow towards greater professionalism.”

He noted that the absence of legal backing to regulate and sanction industry players had led to the lack of policing of standards.

“If a surveyor should be wayward as a result of poor surveying, we suffer financial loss, we surcharge and send him to the criminal court.

Your association hasn’t got the power to sanction him and for that matter professionalism is compromised,” he noted.

A professor of Project Management at the London South Bank University, Prof. George Ofori, for his part, emphasised the important role the construction industry played in improving the livelihood of people.

He said physical infrastructure had always been a key parameter in rating the progress of countries and cited the latest Ease of Doing Business report by the World Bank, which mentioned the difficulty in the acquisition of a building permit in Ghana.

According to the report, the country had 16 procedures and it took 117 days for one to acquire a construction permit. It also put the quality of buildings in the country at nine out of 18 marks.

Prof. Ofori tasked the construction industry to adopt safe and sustainable methods of construction that would help deal with climate change and restore ecosystems.

He indicated that the pursuit of construction for a developing country required commitment and sustained efforts on the part of stakeholders.

That, he said, included pursuing the latest technologies and expertise such as robotics, drones and greenhouse materials in the construction sector.

“Construction is continuous and there is no end point,” he stated.

A member of the Economic Management Team, Prof. Joe Amoako-Tuffour, who chaired the programme, spoke about the need for local content regulation in the construction industry as pertained in other sectors such as mining and petroleum.

He also mentioned the land tenure system, lack of a proper land planning policy and inaccessible housing projects as some of the challenges that needed to be addressed by stakeholders in order to make construction a catalyst for national development.