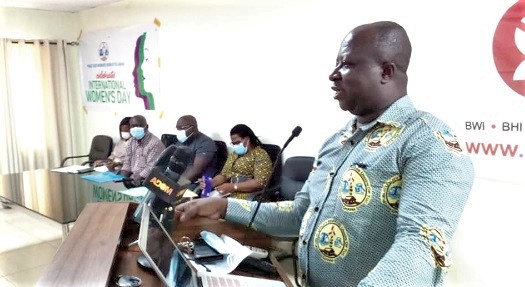 The General Secretary of the Public Utility Workers Union, Michael Adumatta Nyantakyi, has stressed the need for society to explore the many talents women have for its good.

That, he said, was because such potential and talents of women were being underestimated, hence the need to change from that.

Mr Nyantakyi said this at the maiden International Women's Day celebration of the Accra West Region of the PUWU in Accra.

He also charged men to recognise the special role women were playing in the socio-economic development of the country, adding that “we all had an obligation to ensure that women were supported to enable them to take their rightful places in the society.”

Women too, he said, must recognise the special role they were playing and deal with the erroneous statement that they were their own enemies.

"Let us be each other's keeper. Let us help one another. Let us change the stereotype, the prejudice in our minds, especially from our men," he said.

Mr Nyantakyi indicated that society could get the best out of women if they could reach the pinnacle of their potential in life.

"The world will be a better place if we are to encourage women to do the natural things that God has placed in them," he emphasised.

On the occasion of International Women's Day, he said, women should believe that they were unique and special; “they should not look down on themselves.”

"We can break the bias. We can change the status quo and we can lift our women up and it will help all of us," he added.