LEAP beneficiaries given start-up to begin own businesses 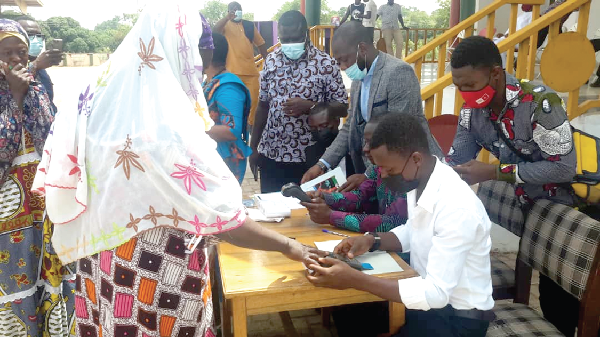 Some beneficiaries going through the registration process to purchase their materials with an e-zwich machine
30.5k Shares

The first batch of beneficiaries of a World Bank sponsored productive inclusion programme which included beneficiaries of the Livelihood Empowerment Against Poverty (LEAP) were last weekend presented with start-up packages to begin their own businesses at a ceremony in Wa in the Upper West Region.

In all, 2,642 beneficiaries from 42 communities in the Upper West and the Savannah regions received tools worth GH¢2,906,200 each to set up their own businesses.

The package comprised tools for income-generating ventures such as bee-keeping, piggery, shea butter, soya beans and groundnut processing as well as guinea fowl and ruminants rearing.

The beneficiaries, mostly women, were selected from all 11 districts of the Upper West Region and Bole, Sawla and East Gonja districts in the Savannah Region after going through registration processes.

The programme was introduced last year for beneficiaries of LEAP and Labour Intensive Public Works ( LIPW ) to enable them to start their own income-generating activities.

The intervention aims at weaning the beneficiaries off the LEAP and LIPW programmes.

Productive Inclusion, a novelty programme, is one of the components of the Ghana Productive Safety Net Project (GPSNP) being implemented by the Ministry of Gender, Children and Social Protection to empower the extreme poor and deprived in society.

The beneficiaries were earlier trained in life skills and micro enterprise courses.

At the ceremony in Wa, each of the beneficiaries was given an amount of GH¢1,100 which was downloaded from their e-zwich machines to purchase the required materials displayed at a mini-market as a symbolic gesture.

The Wa Municipal Chief Executive ( MCE ), Alhaji Issahaku Moomin Tahiru, said an additional 52 communities would also benefit from the initiative before the end of this year.

He advised them to take good care of the tools to ensure their longevity and the sustainability of their establishments.

For her part, the Wa Zonal Coordinator of the GPSNP, Mrs Cedonia Dere, also said the programme provided opportunities for extremely poor households to improve on their lot.

According to her, it was in line with the government’s economic development and job creation agenda.

Some of the beneficiaries the Daily Graphic spoke to expressed appreciation to their benefactors and described the gesture as a fulfilment of their dreams while pledging to take proper care of the materials.