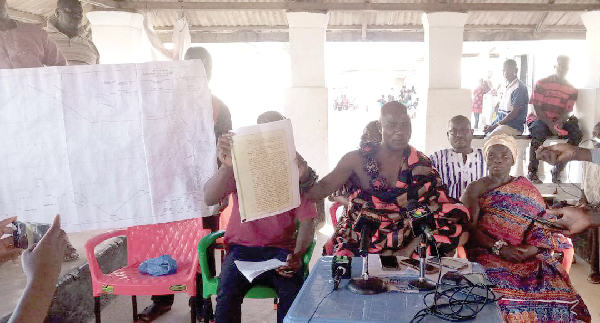 Nana Kwesi Mensah III (middle), the Chief of Kwaprow, explaining a point to journalists at the press conference
30.5k Shares

The chiefs and people of Kwaprow in Cape Coast have called on the government to intervene in a brewing impasse between the community and the University of Cape Coast over land boundaries.

The Chief of the Kwaprow community, Nana Kwesi Mensah III, at a press conference on the issue last Sunday, requested the government to set up a committee to investigate the issues to bring a lasting and peaceful resolution to the impasse and also ensure peaceful coexistence between the university and the community.

He said the call had become necessary, after the university and the community had failed to reach an agreeable decision on the boundaries.

Nana Mensah explained that the government had acquired seven and a half square miles of lands in 1960 from six communities in the area for the university.
He said 938 acres of their land was taken by the university, while the communities were to be relocated and resettled.

Nana Mensah said that the new decision was, however, not rectified in the land documentations.

He further explained that these inconsistencies and the lack of proper agreed demarcations and boundaries had led to a lot of confusion, as both the university and the Kwaprow community were growing and expanding.

He said in 2007, after several complaints to the then government, President John Agyekum Kufuor initiated moves for resolution, which led to the university taking off 602 acres, leaving the community with 336 acres.

He said the community still could not register its lands at the Lands Commission, because the original agreement was not documented at the commission.

Nana Mensah said the new Vice-Chancellor, Professor Johnson Nyarko Boampong, had begun putting up a fence wall into the community's boundaries agreed on under the Kufuor regime, which was affecting the properties of 57 indigenes.

"It is worrying that the university is giving out letters to us the custodians of the land to get off the land while the university continues to use the lands for profitable ventures to rake in profit," he stated.

The release, which was issued and signed by an Assistant Registrar of the University, Kwabena Antwi Konadu, in reaction to the press conference by Nana Mensah on the land boundary confusion between the community and the university, said the university was worried by an alleged threat issued by the chief that 'if persuasion fails, force must be applied'.

It explained that the University of Cape Coast land was first acquired under an Executive Instrument, State Lands (University College) Instrument, 1969 (E.I. 87).

The UCC said at the time of the acquisition, the Lands Valuation Board of the Lands Commission was tasked to identify the owners of the lands. There were 63 individuals and families who owned various sizes of land making a total of 6.22 square miles.

It said records from the Lands Commission showed that full compensation for 95 per cent of the total land size was paid to the prior owners.

It added that of the remaining five per cent not fully paid, records showed part payment to the owner(s), file of the owner(s) not available at the Lands Commission and conflicting claims made by different individuals or families.

The release said it was untrue that the government had reduced the size of the land from seven square miles to 4.5 square miles and had ceded the remainder to Kwaprow or any other community.

"Any such reduction or cession of portion of the university land ought to be done through the same Executive Instrument but no record exists to prove that claim," it stated.

It said notwithstanding the receipt of full compensation, the university had, over the years, witnessed concerted efforts by the leadership of the communities, including Kwaprow, to sell portions of the university lands.

“Provisions under the Public Lands (Protection) Decree, 1974 (NRCD 240) as amended by the Lands Act 2020, (Act 1036), enjoin public bodies entrusted with public lands to take measures to protect the land. The university is currently constructing a fence wall to halt further encroachment on its land. It is this act that some people of Kwaprow are protesting for no apparent justification,” the release said.

The release also indicated that at the instance of the Oguaamanhen, Osabarima Kwesi Atta II, the university's management met with residents of Amamoma and Kwaprow on February, 2, 2022, to discuss the way forward in respect of residents whose structures would be affected by the planned construction of a wall by the university.

It said at that meeting, it was agreed that affected persons should submit relevant details for purposes of verification, since it was established that most of them did not possess valid documents to the land.

The university assured residents, whose properties fall within the wall, that it did not intend to demolish their properties.