Kumasi to get multi-purpose car park, mixed use facility 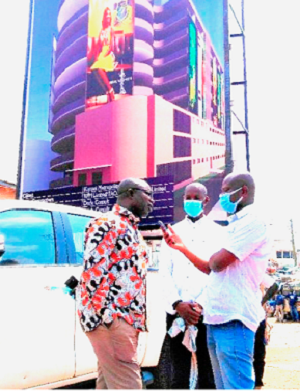 • Mr Osei Assibey Antwi ( left) speaking to journalists at the event. Behind them is an artist’s impression of the multi-purpose car park
30.5k Shares

Two investors have been handed a site at Adum in Kumasi by the Kumasi Metropolitan Assembly (KMA) for the construction of a multi-storey car park and mixed-use facility.

The investors, KFM Limited and TACOA Construction Limited, both local companies, are undertaking the project on a build, operate and transfer (BOT) basis.

Construction will take place over a period of three years and is expected to cost $30 million.

The project will comprise space for 800 vehicles, 110 shops, a restaurant, a banking area, a swimming pool, a recreational centre, a cinema hall, a casino and a supermarket.

He said the multi-storey car park and mixed-use facility would be named after the Asantehene.

Mr Antwi said the facility was expected to complement decongestion efforts in the central business district of the city, noting that the decongestion exercise had become necessary to allow for smooth transport and trading activities in the metropolis.

Mr Antwi said the investors would provide the funds required for the project, which was expected to commence soon and in earnest.

He disclosed that a number of investors, both foreign and local, had put in bids for the project

The Chief Executive Officer (CEO) of the Brightmore Group, the company that did the financials on the engineering works of the project, Mr James Kwarteng, said all was set for the project to take off.

Mr Kwarteng, who is also a managing partner on the project, gave an assurance that good quality work would be delivered.