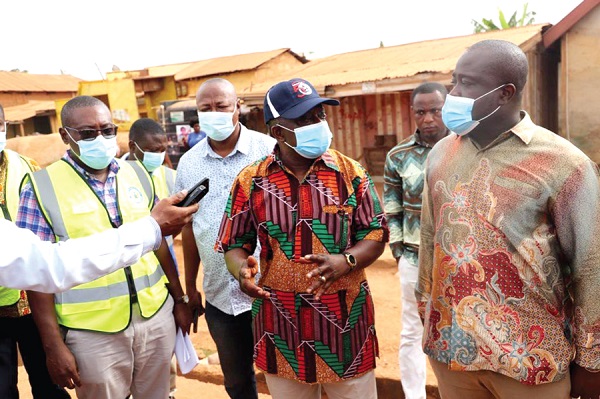 Mr Simon Osei Mensah (in cap), speaking to the media during a tour of some ongoing road projects in the Ashanti Region. With him include Mr Samuel Pyne (arrowed), MCE of Kumasi, and Nana Poku Agyemang (right), the Urban Roads Director of the KMA.
30.5k Shares

The remaining part of the ring road in Kumasi, yet to be dualised would be tacked soon to help ease traffic in Kumasi, the Ashanti Regional Minister, Mr Simon Osei-Mensah has said.

The ring road in Kumasi is about 27km long.

Apart from that, from Asokwa to Anloga junction, Aboabo to Airport roundabout, through Dichemso, Krofrom to Suame roundabout, Abrepo junction to Sofoline has already been dualised.

Mr Osei-Mensah said the government intended to tackle the remaining part and construct a dual-carriageway on that stretch as soon as possible to prepare for the huge traffic flow in town, and also in anticipation of the four new interchanges to be built in Kumasi in the coming years.

“We want to prepare the grounds before these interchanges are built”, the minister said and added that financial arrangements were currently being made after a feasibility study was carried out on the stretch.

The minister was speaking to the media last Tuesday, while on a day’s working visit to some project sites in Kumasi where he inspected works on the ongoing dualisation of the Trede Junction to Anwia Nkwanta road on the Santasi-Obuasi highway.

He also inspected works on the ongoing redesigned mother and baby unit at the Komfo Anokye Teaching Hospital (KATH); the phase II of the Redevelopment of the Kejetia/Central Market and the Kumasi International Airport, all being executed by Contracta, a Brazilian firm.

The minister later visited the Race Course Market to interact with the traders after their relocation, which paved the way for the ongoing Central Market project which is steadily progressing.

The Metropolitan Chief Executive of Kumasi, Mr Samuel Pyne; the Urban Roads Director of the KMA, Nana Poku Agyemang, and a consultant to Contracta, Mr Emmanuel Danso, accompanied the minister on the tour.

The minister said the government was also considering the construction of the Kumasi Outer Ring Road to link the northern part of the country.

He said the link would connect Ejisu to Offinso, thereby diverting all the traffic from the Accra-Kumasi highway.

He said there were also plans to construct by-passes and inner ring roads within the Kumasi Metropolis.

The minister assured the people of the region that the government would ensure that all the ongoing projects are completed as scheduled.