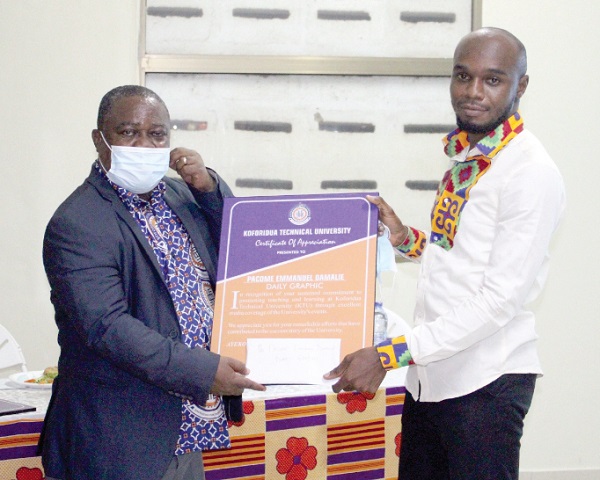 The Koforidua Technical University (KTU) has awarded six journalists, including a Daily Graphic reporter in the Eastern Region, for their commitment to promoting, teaching and learning and excellent coverage of school's events.

A Stringer with the Daily Graphic, Pacome Emmanuel Damalie, was awarded at the 4th annual media soirée organised by the school to enhance a cordial relationship with the media.

Others who were also rewarded on the night were, Mr Maxwell Kudekor, correspondent of Multimedia who also doubles as the Eastern Regional President of the Ghana Journalists Association (GJA), Neil Nii Amartey Kanaku, correspondent of Citi TV/Radio, Martin Henyo of TV Africa, Kojo Ansah of EIB Network, and Ama Tekyiwaa Ampadu Agyeman of Ghanaian Times.

He indicated that the media have had a fairly cordial relationship with the university, though they also had their own challenges; adding that the media still remained a substantial part of the progress and success story of KTU over the years especially during the transition from polytechnic to technical university.

Mr Kudekor appealed to the management of the school to consider awarding scholarship to journalists to gain specialties in some of the programmes KTU undertakes to enhance effective reportage and promote teaching and learning at the school.

He explained that the developed world was littered with journalists with specialisation in almost every field, but same could not be mentioned of Ghana as only few specialised in various fields, indicating that granting scholarship to journalists to take up courses or programmes undertaken by the university would curb the situation where journalists in Ghana report on all beats and help establish authority in their reportage in beats related to their field of study.

The Vice Chancellor of KTU, Professor David Kofi Essumang, who graced the occasion, also expressed gratitude to the media for their continuous support and indicated that they would work to maintain a long-lasting relationship.

"We also recognise and appreciate the support from our media partners who have over the years supported us in our growth. We have continued to enjoy a very good relationship with the media. And we are optimistic that this relationship will continue to flourish for our mutual benefits in the coming years," he said.

He expressed commitment in working with the media to achieve the dream of the school as a world-class technical university.

"We are committed to working with you our cherished partners. As we look ahead, we know that there is still a great work to be done for the upliftment of the Koforidua Technical University and we collaborate effectively to achieve our dream of becoming a world class Technical University," the Vice Chancellor said.

He said the university as part of its strategic plan (2016-2022) has taken the challenge by expanding and diversifying its programmes to include Technical and Engineering programmes; adding that it "currently runs 20 Higher National Diploma (HND) and 12 four-year Bachelor of Technology as well as two year top-up Bachelor of Technology programmes" to train students to acquire relevant knowledge, skills and the right attitude for sustainable development.