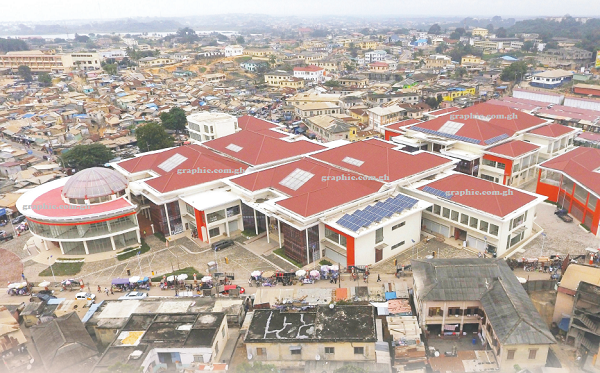 Kotokuraba Market is the largest market in Cape Coast, the capital of the Central Region of Ghana.

The market is the economic hub of the region, with all major trading stores located around it.

Part of the market has a big transport yard from where various buses and cars transport traders and their wares, as well as individuals, to different parts of the country.

The market is bordered to the north-west by Mfantsipim School and the Ghana Broadcasting Corporation Hill.

On the east is Tantri, a busy transport yard and the major departure point for travellers moving out of the city.

Prior to the establishment of the Kotokuraba Market, trading activities in Cape Coast took place in a vibrant marketplace located along the beach.

Cape Coast was popular for the sale of crabs, salt, fish and other commodities and soon became fondly known as ‘Oguaa,’ which translates in English as ‘market’.

Over time, Cape Coast became the first colonial capital of the Gold Coast and as such, saw massive improvement in its social and economic infrastructure.

The beach area in Cape Coast was to be developed as an administrative enclave, however, the atmosphere was not conducive.

The market activities along the beach created congestion, noise and dirt, hence the decision to build a new market inland.

In the late 1930s, the colonial government developed the triangle-shaped Kotokuraba Market in Cape Coast.

The traders in the old market by the beach were relocated to the new market.

Since its development, the wholesale and retail trade in Kotokuraba Market has been one of the largest sources of revenue for the municipal authority in Cape Coast.

In June 2012, the Cape Coast Metropolitan Assembly (CCMA), under the administration of the National Democratic Congress (NDC), secured a Chinese government concessional loan to redevelop the old Kotokuraba Market into a modern market complex.

After decades of existence, the old market was pulled down in 2014 for rehabilitation following the relocation of the traders.

The new market complex was completed and officially opened in 2016. It comprises shops and supermarkets, a car park, office blocks, two banks, a school and a clinic.