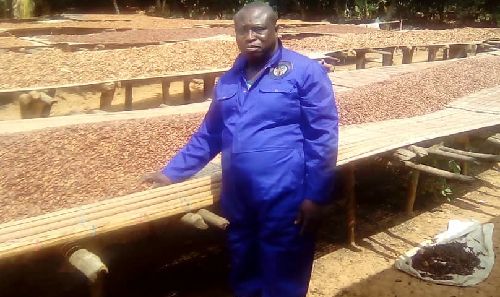 The National Best Cocoa Farmer, Mr Charles Gyamfi, has urged public sector workers to invest part of their income in agriculture to provide them with a guaranteed improved living conditions after retirement.

He said the Planting for Food and Jobs programme was one area where public service workers stood to reap good dividends with their investments.

Speaking to the Daily Graphic last Saturday at Bourkurukuruwa in the Tano North District in the Brong Ahafo Region where he has one of his farms, Mr Gyamfi said investing in agriculture came with enormous returns.

The National Best Cocoa Farmer, who is a circuit court registrar, said he had for the past 28 years combined his office work with farming perfectly without any hitches.

He explained that his achievements as a cocoa farmer was as a result of good planning.

Mr Gyamfi, 58, has a total of 101 hectares of cocoa farms in the Brong Ahafo Region.

He was crowned the 2018/2019 National Best Cocoa Farmer at the last National Farmers Day celebration held in Tamale in December last year.

For his prize, he received a brand new Toyota Hilux pick-up vehicle, a motorised slasher, a motorised pruner, a motorised sprayer and a set of protective clothing, insecticides and fungicides, a carton of Pyramid chocolate products and a glass plaque, all donated by the Ghana Cocoa Board (COCOBOD) .

Mr Gyamfi encouraged the youth to go into agriculture in order to reduce the drift to urban centres in search of non-existent jobs.

He appealed to chiefs and land owners to make land available to the youth who decide to go into agriculture.

He further encouraged district assemblies and the government to channel a portion of the one million dollars earmarked for constituency initiatives into rehabilitating and constructing feeder roads in farming communities to facilitate the carting of farm produce to market centres.

The government, he said, must also take key interest in developing the infrastructure in rural communities since it was a key factor in making the people take an interest in agriculture.

He acknowledged the immense contribution as well as the various initiatives by COCOBOD, such as the Productivity Enhancement Programme (PEP), provision of free seedlings, granting of subsidised fertilisers and artificial hand pollination, had had on his farming business.